I think this is going to be the first bird blog here since A flock of Geese or Blackcap Warbler, because there’s rarely news and seldom photographs related to the appreciation of wildlife and birds. This morning I was delighted to have a brand new visitor to my garden, well new to my observation anyway. A beautiful yellow cream and brown spotted song thrush came and perched right outside the bedroom window for about ten minutes, and then was joined by another. So a pair of these territorial little snail eating machines has probably moved into the neighbourhood, and could well breed in the vicinity next spring.

“So what is so special about a song thrush, we get them all the time” you may be thinking, depending on where you live. They were certainly very common in gardens I knew as a child, both on the edge of the countryside and in the suburbs and parks of the city. I moved to my present house in 1991 and after a while I became aware of the lack of diversity in the wildlife population. I think I counted only seven different species of birds, which is pretty poor even for an urban garden. The song thrush was not amongst them. They must have been around once, but I know they are particularly susceptible to moluscicides, so maybe they were all wiped out by the type of gardeners who administer slug-death in a vain hope to protect their hostas.

About ten years ago a neighbour planted a silver birch tree right near the boundary, and this very quickly shot up to become a tall, matur 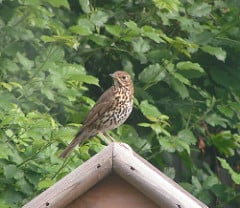 e tree which had an enormous positive impact on the bird life. Finches, wrens, warblers and other tit species arrived. Slowly my little oasis of urban garden environment has become more wildlife friendly with the addition of a pond, larger shrubs and climbers, native plants and trees. Having a small garden pond leads to providing a home to frogs toads and newts, and toads tend to stick around and eat slugs, which is great, but they haven’t mastered the art of extracting snails from their shells yet. Only thrushes can do that, so the absence of thrushes makes for a flourishing snail population. That is until today.

The little rowan tree which I bought as a whipling helped provide a source of berries through the autumn and winter to blackbirds, bluetits and robins, which always brings a cheer to weekend morning lie-ins, but the arrival of a pair of thrushes was the best. I’m delighted. They don’t hop about so much like common blackbirds, they like to stay motionless, taking advantage of their spotty camouflage to break their own visual outline. A male blackbird is shiny black with a bright yellow beak so there’s not many places they can dissolve into the background but a thrush has a more sedentary habit and can be easily overlooked unless seen on arrival. A grand entrance indeed.