What is London Overground

There’s a little two carriage train that runs from Barking to Gospel Oak, and then on to Richmond or Kew Gardens. The route carefully skirts around the whole of central London, passing through reservoirs and industrial estates, over bridges, alongside cemeteries, with views of the backs of houses. Known as the “North London Line”, and neglected for decades, the line has until recently been in constant danger of closure due to a downward spiral of poor service and lack of customers. Under the franchise system, the line was taken over by Silverlink Metro who replaced the ancient trains with some slightly less ancient Sprinters from one of the UK regions, and painted some a ghastly purple colour. There was a half hearted attempt to do up some of the platforms, and the timetable frequency of service remained at two trains per hour on the Barking to Gospel Oak stretch, during daylight hours only it seemed, except Sundays when there was usually not even a replacement bus service.

That’s all changed because from November 11th the line is taken over by Transport for London and becomes linked to the London Underground tube service and timetable.

Last month I noticed automatic ticket machines on the platforms instead of a guard with his portable printer, and some other machines with a blue hood over them and lettering which spelled:

Yes, the popular (because cheaper) Oystercard and a more frequent time table service is coming to the North London Line (silverlink) on Nov 11th when TFL take over “London 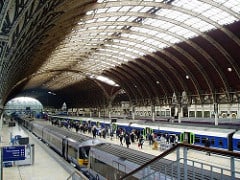 Overground” and start to integrate it with the rest of the capital’s transport systems.

The new London Overground routes will also be shown on the famous Tube map itself, how about that! And there’ll be “an Underground-style service” which may not necessarily mean overcrowding, uncomfortable journeys in hot stuffy trains with noise and anti-social behaviour. Instead passengers will benefit from fast, frequent, accessible services, and safety and security standards. Lovely.

This is actually very good news, because the Oystercard option will provide more flexibility and so is the announcement that the crossrail project linking Essex through East London and the Isle of Dogs to central London, Paddington and beyond is finally set to go ahead, albeit too late for the Olympic Games in 2012.

All we need now is for TFL to take over the “One” line from Liverpool Street to Shenfield and Gants Hill so that the pre-pay Oystercard can be used in Forest Gate and Ilford as well as on the London Overground It’ll come eventually, but unfortunately not on the timetable for any day soon.