Paris Breaks are not just for springtime

Last year I managed to take two Paris breaks, one in April and the other in the autumn. Both times Paris was wonderful, but quite different. The chances of a bit of sunshine during a short break to Paris are very high, but even on a slightly cold and windy day, you can’t help but be enticed to go outdoors and walk alongside the Seine, through the endlessly surprising streets and squares, crossing the magnificent bridges. You can probably tell already that I love Paris.

For so many people who have spent any time there, Paris is a very special place. In my case, it’s where I spent the first part of my life away from home. I visited on a whim at the age of seventeen and stayed for two years! For the first few months I lived in the North, off the Rue LaFayette near the Opera, big shops, and boulevards Magenta and Strasbourg. Then I moved down to the Latin Quarter, where the other musicians hung out. So I gradually learned enough about Parisian life to get right under my skin, and I’ve been going back irregularly ever since. Paris hasn’t changed that much since the 1970s, or for that matter since the 1870s after Haussmann laid down the plans for six story high buildings of slate and sandstone arranged onto an intersecting star shaped street map.

In the old days, I used to have to catch the night Ferry. This was available at a special student rate for anybody under 23 but it took all night to get from Gare du Nord to Victoria, or back. At Victoria station you had to go right to the end of the far platform to a little office called “Transalpino” and buy a ticket for £10. The night ferry also took first class passengers in a special Paris Pullman carriage which was actually rolled onto the car ferry and onto the track to continue from Calais, so they could sleep the whole journey in their couchettes. But we had to wait around on draughty platforms for hours either side of the channel, and contest with winter gales and noisy children all night on the old British Rail Sealink ferries.

But now we have Paris breaks by Eurostar, and what a blessing that is. Even before the St Pancras terminus was brought into service last November, the Eurostar was a huge improvement in comfort and convenience over the train and ferry system. And better than flying because you disembark in central Paris ready to catch a metro, hire a car, or just walk down the Rue Lafayette as I did. The new route means no more trundling though south London and Kent at slow speeds. The Eurostar train enters fast tunnels underneath North and East London, then another under the Thames, and before you know it you’ve passed Ashford and are about to enter the Channel Tunnel at Folkestone. Total journey time can be as little as two hours and fifteen minutes, which means I might be able to fit in a short Paris break at times which simply weren’t practical before now.

Everybody has their own favourite places in Paris, and maybe I have more than most so I won’t list them, but maybe it’s worth explaining that you don’t need to plan everything in advance. One of the biggest pleasures in Paris is simply to take off on foot and wander off in a new direction around the streets, stopping to notice anything that intrigues. It works every time, North or South, in the Marais, the quartier Latin, the big boulevards, little street markets, around Montmartre, the little parks, churches, and of course the cafes, bars and restaurants. 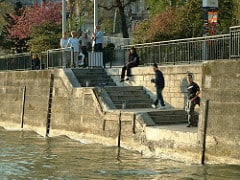 A recent innovation is the Batobus service, which is meant to be part of the transport system rather than a visitor attraction like famous Bateaux Mouches. It’s a hop on hop off service and the passes are priced in such a way that you might as well buy one that covers the whole period for short breaks in Paris. The trip itself is spectacular and enjoyable, and the route allows for easy exploration of Jardin des Plantes, Notre Dame, Champs Elysees, Eiffel Tower, and many other important destinations. I tried to do the full round trip twice in one day, but one boat terminated at Eiffel Tower, so I caught the metro back from there. No problem.

Ever since that day when I was seventeen, wandered down the street from Gare du Nord, checked into a hotel off the rue Lafayette and stayed there for three months, I’ve never bothered to book a hotel in Paris. I’m not saying that’s the best thing for everybody, it’s just because I can. These days I generally have an idea of which area I want to head for, and sometimes choose a Hotel I’ve stayed in before, because I know the rooms look out over an interesting quarter. But if they’re full, I can find another, maybe better. Probably best to book if you’re arriving after 4pm though. Location is more important than having the biggest indentikit modern room with trouser press and everything, so get out the map and make sure your intended hotel is either located near one of the interesting central areas, or else perhaps by a fast RER metro station that’s only one or two stops from for example St Michelle.

Getting to London first

St Pancras station is right next to Kings Cross, so if you are setting off from Luton, Watford, Milton Keynes, Rugby Birmingham, or anywhere in the Midlands it’s easy to transfer. Likewise the East coast line makes Paris breaks from York, Leeds, Sheffield or even Newcastle or Edinburgh very easy. From South London, Surrey, Kent or Essex though, you can board the Eurostar at Ashford or Ebbsfleet. Coming from the West, you’ll need to make your way around on the underground and here’s a good tip for Paddington Station. When you get off the train don’t follow everybody else down the platform towards the main part of Paddington Station and the escalators down to the tube. Instead turn around and go up the stairs and over the bridge. This leads directly to the platform for the Hammersmith and City Line, which follows the same route as the circle line straight to Kings Cross St Pancras for the Eurostar

Food and drink on Paris Breaks

I’m a bit of a foodie so restaurant dining and cafe bars are one of the main pleasures of Paris breaks. It’s also a great opportunity to buy some good wine, baguette, camembert, saucisson and salads and have a delicious picnic in the hotel room, or maybe in the park. I take a corkscrew, glasses and cutlery to make this possible. There are both fine restaurants and cheap and cheerful tourist menus everywhere, including most cafe bars which double up as brasseries at lunch and dinner times. The concentration of restaurants in the pedestrianised area of Rue La Huchette in the Latin quarter is also a magnet, with their brochettes of giant prawns and lamb chops out on display. The prevalent theme changes every few years, from North African couscous, through Greek Cypriot to Swiss fondue, and currently featuring a newly fashionable ethnic cuisine – regional French! Unlike in England at this period, you can order a Pastis without getting blank looks, red wine will be in the classic style, not new world, and Leffe beer is always served in chilled glasses. One of my passions is to champion traditional cider so is this a problem in Paris? No, because there are Breton pancake houses everywhere, Creperies which serve savoury buckwheat pancakes with bowls of breton cidre bouchee. That’s lunch on arrival sorted then, one of the things that make Paris breaks an instant change of gear for relaxation and inspiration.

I realise I’ve gone on a bit in this post, which is not really central to the theme of this research blog, whatever that’s supposed to be, but I haven’t even covered the half of what I was intending to write about Paris, there’s so much to go into. I could just write and write about Paris whenever I have some time or need to escape into memories so what I’ll do from now on is to try starting up a new Paris Breaks blog and post a short series of articles and images occasionally over there as well.