I’ve been trying out ustream.tv for making live broadcast videos and I think it’s something I’d like to experiment with further. So I decided to pick a day and time to see if I can persuade a few people to tune in for some simultaneous music and chat.

I decided on Tuesday Evenings at 7.00pm UK time for now, but that could always change if turns out not to be a good choice. I have broadband issues right now, so this may not start with immediate effect but I’m intending to broadcast most Tuesdays throughout August and then resume mid September. It should be easy enough to notify anybody of schedule changes once we get going. 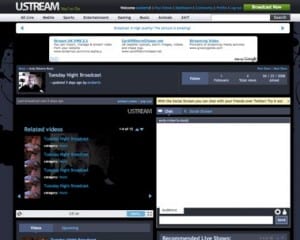 Ustream.tv is essentially a narrowcast media, allowing anybody to start up a channel and ‘broadcast’ live from a computer. All you need is a webcam, and built-in microphone to start with, and a decent broadband connection, which I intend to have very soon.

Well that depends who turns up, but the intention is to busk a load of songs, as the whim takes me, and keep an eye on the chat room at the same time. Maybe there’ll be somebody else, who knows. The technology allows for the show to be transferred across to other hosts, so in theory we could end up with a series of ‘floor spots’ as it were, all the while keeping the same crowd connected.

One of the big advantages with the ustream system is the way the live shows can also be recorded and saved, and instantly uploaded to youTube as well. Bands can do this quite successfully by building up support for a ‘live internet gig’ weeks in advance, then performing in a room with a webcam placed in the corner to pick up the whole band. The online audience an get a real sense of being present at a live event. But me , I’ll just be sitting at my iMacÂ  with a guitar and keyboard, generating lots of song files and interacting with whoever turns up. I hope by making it a regular event that some kind of build up might happen over the weeks, to amass a small group of regulars from amongst the billions of internet users out there who might be interested in acoustic music with me.

As an example, here’s a video that originated in ustream as part of the prototyping session and is now embedded here from youTube. It’s a song that I always thought was a Wizz Jones song because he likes to play it a lot and recorded it but it turns out to be by Mose Allison

You can count on me to play my part

So there you go – just one last reminder then:-