Sitting up late chatting with an old friend last week I saw a gigantic locust-like insect climbing up the kitchen wall. It was bright shiny green, about 10cm long and heading for the breakfast cereals. We decided it belonged outdoors so I put one hand over it and cupped it with the other and walked towards the door with the giant green cricket safely trapped. Then it bit me, so I dropped it with the shock. I wasn’t expecting a harmless cricket to bite, although this was like no cricket I’d ever seen before. Gigantic, enormous and brightly coloured it looked like a tropical specimen or else some new form of hybrid mutant vampire cricket. We escorted it to the outdoor world eventually but it did try to get back in again once or twice.

To help with identification, here’s a picture of the giant green cricket before it bit me. 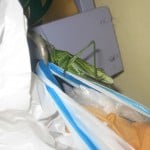 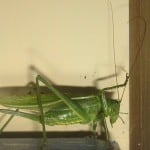 The location is near St Agnes, Cornwall, UK

Thanks to Barbol on Flickr in Zaragoza, Spain, the monster bug can be confirmed as Tettigonia viridissima, or the Great Green Bush Cricket. Apparently female, too.

These insects inhabit most of Europe, including the South of England , as well as North Africa and the Middle East. One of the largest crickets, the Great Green Bush Cricket reaches a size of 30-40mm, with males generally being smaller than the females. As the name suggests, the Great Green Bush-cricket is brightly coloured shiny green. One characteristic that helps to distinguish crickets from  locusts is the length of the tentacles that start at the head and grow back, reaching almost the length of the body, as opposed to locusts that have short tentacles. Some cricket species can grow tentacles up to three times the length of the body. Both males and females have wings.