Enlightenment at Hampstead Theatre and Deathtrap

Enlightenment at Hampstead Theatre and Deathtrap

I’m going to see a play called “Enlightenment” at the Hampstead Theatre in London on Monday.

I don’t really know much about the play “Enlightenment” apart from the slightly worrying description “a mesmeric psychological thriller” and this trailer video here:

I’ll probably come back here and let you know how the play went next week.

Trailer videos for plays are becoming quite the thing, but I wonder how apt it is to make a very filmic piece of media to represent live theatre, which is a very different kind of thing entirely.

Another example is the poster campaign for Deathtrap , another thriller play but also a comedy, which includes showing the outdoor gravedigging scene on camera, when the live stage play takes place entirely indoors in one room. 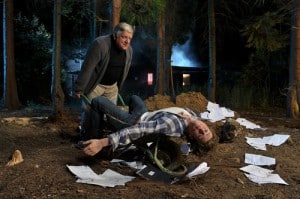 Yes, that’s Simon Russel Beale, The current Home Secretary in Spooks, pushing the wheelbarrow with Jonathan Groff in it.