You don’t have to boil chickpeas for forty minutes or more to make them edible, you can eat them raw if you just allow them to go through a natural process that converts the inedible dry starches into tender sweet tasting legumes.

I won’t witter on about my record player again today, although the novelty of having one working still gives much pleasure, no I’m going to indulge another interest of mine – food.

The food is sprouted chickpea hummus

I’ve been making raw hummus from sprouted chick peas regularly for months now,  and the recipe has settled down without much in the way of variation. It’s easy enough, nutritious, cheap and tastes great, so why tamper with an almost perfect recipe? Today I discovered a small improvement through the use of  brown chick peas instead of the usual light coloured ones. I tasted a few of the sprouted brown chick peas whole before mashing them up and the flavour is stronger, more like that of fresh green peas and less starchy, so that was promising and the resulting hummous didn’t disappoint either.   I don’t seem to have any photographs of my home made sprouted chick pea hummus and I don’t really do recipes with measured ingredients lists and separate methods, becaus

e that’s not how I cook so I’ll just list the contents and explain the minimum necessary.

The main thing I suppose is getting the chickpeas to sprout with a close to sprout with a close to 100% success rate. Soak overnight first and most of the next day, so about 16-20 hours is the kind of  time, as long as the dried peas have finished swelling up. It’s best to do a small quantity and then start up another batch a day or so later, rather than have too many at the same stage at once. So I use a glass jar, with the dried peas filling about 10 % of the jar, filled with water. The chick peas then swell to fill about a quarter of the jar, and I find that laying the jar on its  side prevents swelling peas from getting jammed in against each others, which is not the effect you want. They need to be able to move of their own accord if they want to. OK, so once soaked they need to be rinsed in cold water and the easiest way to do that is in situ, using a piece of muslin over the neck of the jar, fastened in place with a rubber band. That’s the best wa 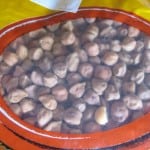 y to sprout stuff, in glass not plastic. The sprouts are rinsed again about twice a day, and are kept in the daylight in front of a window during the daytime, then I move them away from any cold draughts at night. This way I seem to be able to keep up production all the year around whereas previously I used to have trouble from around November onwards.

The sprouts are ready to eat raw in just about 2 days after soaking. Once the little white shoots are clearly visible on nearly all the chick peas, and before they are much longer than about one centimetre. You CAN let them grow on a bit bigger but they don’t improve and there is a risk of something going off so I think it’s best to halt the process and either consume or refrigerate the sprouts once the conversion of storage into growth has occurred and you can see the root shoot starting to move out from the little globe of transformed starches. 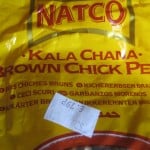 to sprout chick peas, now for making the hummus.

Place the sprouts in a food processor, I use a moulinex mini chopper but anything with chopping blades will do. Don’t use a liquidiser goblet though, they just burn out when you add the tahini and everything slows down. Trust me, I tried several brands and anything less than a super expensive industrial grade liquidiser won’t last long under the demand.

Add cloves of garlic. To give an idea of quantities, I’m talking about enough hummus for two people’s substantial lunch here and that comprises half an ordinary coffee jar of sprouted chick peas, three small cloves of garlic or one big one. That sort of thing. 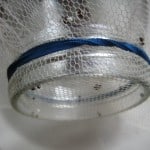 Start up the chopper, or ‘blitz’ the mixture I think is the current terminology for engaging kitchen power tools….  to roughly chop the peas and garlic together. Add a generous quantity of olive oil and chop finer, almost to a paste now. The rest of the ingredients are a good dash of cider  vinegar or white wine vinegar and some lemon juice. These are interchangeable really, so if you run out of lemons that’s not an obstacle. Black pepper, just a pinch of salt – commercial hummus is much too salty, for shelf life purposes. A pinch of cayenne pepper or chilli powder. A teaspoonful of sesame seeds. The tahini itself goes in last, after giving everything else a good blending, about a tablespoonful, including some of the oil if your sesame paste has separated a bit, which is quite normal with some brands. The ‘light’ tahini is perfectly acceptable too, but seems to just work out a bit more expensive because you tend to use more of it.

Now then, after adding the tahini and starting up the mixing machine again, everything will slow down and start to gum up because tahini is thick and sticky. Don’t carry on very long at that stage because that’s how you burn out motors. The trick now, is to start to add a small quantity of water, then a bit more, until the mixture frees up and blends to a paste, still with a bit of coarse texture though and then that’s perfect. Done.

So that was my recipe and technique for making sprouted chickpea hummus, an ideal raw food vegan nutritious and tasty meal or snack food.

With thanks to Dave’s Experiential Kitchen years ago for getting me started, and to Ian Tindal for the suggestion of sprouting brown chick peas.