I’m trying to gather together all my stuff about music making, guitar playing and songwriting with news of any latest songs, gigs and links out to various places on the web where Andy Roberts Music can be played and often downloaded for free. I think the best place now for a while is going to be on ReverbNation’s Andy Roberts Music page so here’s the widget player:

The largest collection of my songs is still on Last.fm

And the most recent updates are likely to be on the dedicated music blog and youTube.

The most recent new songs to be uploaded are from the live performance at Havering Folk Club on April 1st 2009.

This one is provisionally called ‘Cajun Music, Cajun Food‘ and here’s the video:

One of the songs written during the solo trip to Spain in 2003 about a journey to work via London Bridge. 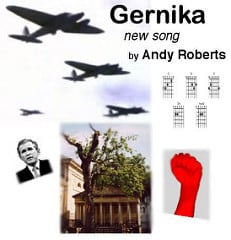 Gernika is the correct spelling of the title of this epic 8 minute song which interweaves the history of the ‘bombing of Guernica’ as depicted in Picasso’s famous painting, with a story of visiting the town during 2003 just as Baghdad was being treated to a similar fate.

The song Gernika has its own sub-page on this blog

I have two songs on ‘Splinters 3’ : voting still open on thedrupal site
Buy ‘PARTS’ for $10 on SellaBand

I’ve tried to concentrate more on performing and writing my own songs recently but since doing a weekly spot at Havering Folk Club and another session on the weekly webcast Ustream show, I’ve fallen back on doing my own interpretations of some of my favourite songwriters tunes. Some of these tend to find their way onto the Any Roberts Music youtube account as well and here’s an example in the form of Bob Dylan’s One more cup of coffee (Valley Below)

Thanks for visiting Andy Roberts music and songwriting sites