The history of Gernika

“On one single attack that lasted three hours, the fascist forces of Spain, Nazi Germany and Italy killed 1,600 helpless Basque civilians in the town of Gernika in 1937, a crime for which Madrid has not apologized to this day.”

The song was set to music and recorded in December 2006.

Thanks to individuals from the Stormcock list who volunteered to review an early recording and with their comments both helped and encouraged me to improve the production:

The story of the song Gernika

Everything is true.
In April 2003 I went on a solo trip around the Basque region of Spain and France. Driving inland from east to west, I called in at the town of Guernica, and after some lunch I wandered towards the town centre and heard the sound of guitar music and singing. It looked like a street party, possibly a wedding. But every few minutes, somebody wound up an old air raid warning siren. I stood and listened to the south american folk singer for a while, and then a woman who was seated at the long table with her family beckoned me over.

“Would you like to sit down, have something to drink, some food. Do you know what this is about? Today is the anniversary of the bombing of Gernika, here” “Oh really?” We chatted some more. I had read a moving passage in my alternative guide book about the history of Guernica but hadn’t noticed the date. When the musician stopped, people looked disappointed but he had run out of songs. After travelling alone for a week I was appreciating the company there and moved by the occasion and I felt compelled to offer my fraternal greetings in the international language of music, but what kind of song would be appropriate? “Imagine” came to mind, and seemed to go down well. Then I quietly started singing “the internationale” acapella, holding the silent guitar. An older man at the back recognised the tune and stood up, earnestly making a fist and singing with gusto, then everybody else rose from the tables and seats and joined in.
As I drove on that afternoon, I began mentally penning the first few verses of the song. In the evening, at my hotel, the TV was showing that day’s footage of the destruction of Bagdhad and I finished the lyrics within the next day, I think.

A few photos from that day

It was nineteen thirty seven, the revolution already betrayed
But in Catalan and Basque lands,they struggled on, in their seperate ways

Now Franco was in with the Luftwaffe, Von Richthoven had an idea
If we send in enough of our new heavy aircraft,
we can create, mayhem and fear ( blizkrieg, shock and awe )

in Gernika, Gernika untested strategy
to bring down a nation in just a few ho-urs
let’s just try it and see ( just watch us and see)

The first act of modern warfare, where death and destruction
come raining down from the air

With god and his church backing both sides, they like their bread buttered that way
it was decided to saturate Gernica, and they chose to do it on market day
more bangs per buck, that’s the market way

Gernika Gernika firestorm technology,
how much would you need to destroy the whole town
let’s just try it and see

So you say the General was a monster, and the little Austrian mad
but how to explain Sarejevo, and now, what about Bagdhad?

We’ve bombs with onboard computers, to liberate the looters

I just happened to be in Gernika It wasn’t far out of my way
I heard the air raid warning siren, I didn’t know it was Gernika day

I sang John Lennon’s ‘Imagine’, that optimist atheist hymn
When I started the Internationale every woman and man, stood up and joined in
In English and Spanish and Basque barely legal,
Outside the parliament you had to be there,
On Gernika day, in Gernika square

in Gernika, Gernika, assembled under the tree
making plans for Gernika, let’s just try it and see

Well the day after the fascists bombed Gernika the marketplace covered with meat
the architects of war looked down and they saw
a successful experiment
with broken hearts and body parts, strewn all over the streets

So they continued with Warsaw and Coventry, Then Dresden was razed to the ground
In just one night with a blanket of fire, by the RAF bomber command
not the last place, to hear that air raid warning sound

Then the Germans blitzed East London and the Americans bombed Japan
gone nuclear, to increase the fear, Civilian targets They proved that they can,

ever since Gernika, Gernika, new precedent, new strategy,
what happens after regime change Just watch them and see.

Gernika, Gernika, Gathered under the tree,
to remind the world about Gernika, in April 2003
With survivors decendents in Gernika, the last fight let us face,
For the internationale unites the human race.

It’s an easy song to play, apart from some of the timings. Five main chords are used:

And here’s how they fit the words: 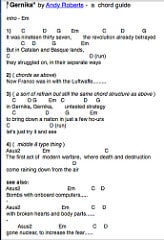 Notes from the translator:

PS: Hi Andy, just a couple of notes. First, the proper name of writing the town’s name is its Basque name, Gernika; “Guernica” was popularized after Picassos’s picture but is actually the Spanish form of writing it. Second, the poem is good but is not totally accurate: Gernika wasn’t the first civilian target bombed deliberately. It was the first… in a European “white” town but the “nice” Italians did the same to Ethiopians and Eritreans when they tried to get rid off the occupying boot. But they were blacks, just a little detail a lot of people forget 🙂 it is known that even Churchill justified the Italian actions when in places like Africa.

I don’t know how many other songs there are about Gernika, I found one. This is a Basque agit-punk-reggae band called ‘Kortatu” singing “Gernika”. Notice that while I adopted the correct local spelling for the name of my own song, I use the english pronunciation “gUrrrnikuh” rather than the indiginous “Gerneeeeka” as sung here.

This one seems to be genuine newsreel footage from the franciosts or nazis showing the bombers taking off, possibly from Burgos. (removed from youTube by submitter)