Introducing ‘Blog Friends’, a new application on Facebook which fills an apparently simple yet imporant niche. This is what it does:

It’s just been launched as a public Beta by Luke Razzell, who has been blogging on the topic of “Identity” for several years now, so we can expect the theoretical underpinning of the application design to be a sound one. It certainly seems to have all the makings of a succesfull Facebook app, including the capacity to spread virally, and appealing to the needs of bloggers to attempt to reach wider audiences. Every thing has been well thought out including the name, logo, taglines and this graphic: 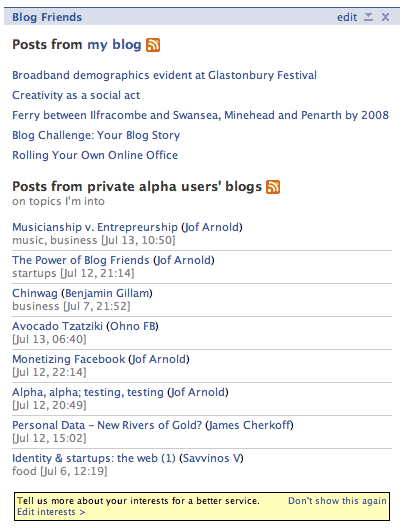 Notice the RSS icons – this is one application which allows you to take your data outside of Facebook instead of just sucking things in. So it drives a small hole into the ‘walled garden’ criticism of the fashionable Facebook fad.

Outside in my feedreader I’m suddenly discovering a number of new blogs and posters, within my specified areas of interest, all thanks to my blog friends. And no, I don’t have any financial or other stake in the enterprise, I simply volunteered to alpha test out of of interest and because I’ve known Luke as a blogger for a long time. The fact that the whole application was developed from specification to working Beta in around three weeks has staggering implications for the future of web apps and Facebook.