London Underground tube mainentance workers went on strike today, as planned five weeks ago. The dispute is preciptated by the employer Metronet going into bancruptcy and the RMT union is campaigning for the maintenance of Transport for London’s undergound infrastructure to be brought back under public ownership. Labour Prime minister Gordon Brown and London Mayor Ken Livingstone both spoke out against the union but the strike was solid. 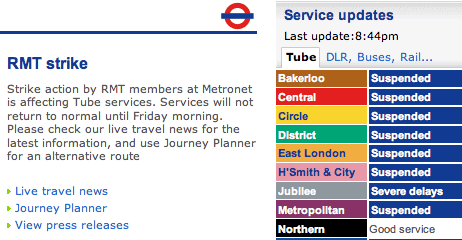 That is a positive development and we hope that Metronet and its administrator will now take our members’ legitimate concerns seriously.

Instead of shouting insults and pointing accusing fingers, all those involved should now recognise that those concerns need to be addressed.

It is five weeks since we gave the company notice that we were balloting over the issues involved, yet there was no sense of urgency until it became clear that our members were determined to win the unequivocal guarantees we are seeking.

Our members have shown their determination by delivering a rock-solid strike and, pending any positive outcome from today’s talks, it will remain on.