People walk up and down along the length of the crack, and sometimes they cross it. Bending over and peering down into the abyss is popular too. Children like to walk with one foot on each bank of the gorge, like giants playing at trains. Those with a logical literal nature are puzzling out loud as to how the crack was constructed. Some are chatting about other times in other worlds, not really conscious of the art, but still acting and behaving in a manner which betrays a spatial awareness of it. A couple holding hands over the crack, whilst ambling down to the end and back, like a promenade along the seashore. 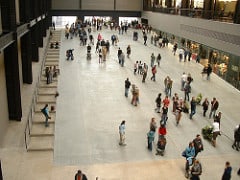 This is Doris Salcedo’s “Shibboleth”, the latest in a series of memorable, grand modern art installations in the enormous Turbine Hall of Tate Modern, London. The first in the series being Louise Bourgeois with the huge enclosed spiral staircase sculptures, and another famous one being Olaf Eliasson’s “The Sun”. What all of these installations have in common, apart from being huge and important works of art, is the way in which the audience participates in the art. Watching the way that people interact with it is as much a part of the experience at Tate Modern as is appreciating the art itself. 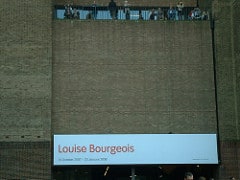 The Turbine hall is immense, and that makes it a specific challenge for each of the artists in the Unilever series. One tried to fill it with sound, and failed in my opinion. Another with white cubes, an intriguing effort. The crack is almost as effective as the Sun for initiating strange behaviours in the London mob, although the extent to which the artist’s intention to say something about the foundations of imperialism and racism is achieved is anybody’s guess.

I took some short video clips which just happened to capture one man amongst many waving his arms about explaining the crack in belgian. There are other things going on in it as well, but he is clearly the star performer.