I’m really looking forward to going to the theatre tonight. We’re not going to the West End though, but to the Theatre Royal in Stratford. That’s Stratford, East London, home of the 2012 Olympics; nothing to do with Shakespeare’s birthplace in Stratford-upon-Avon. The show is called “Marilyn and Ella” and it’s about a famous meeting between Ella Fitzgerald and Marilyn Monroe at a time of continuing racial segregation in the USA. Yes, it’s set in 1955, just a few years before I was born and when American society was run under a system similar to apartheid. So it’s a small, two woman production I think, but with a big subject plot and some big songs. The premiere was last night, so tonight, Saturday should be a big night too. 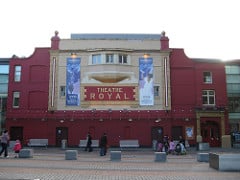 I suppose Theatre Royal, Stratford East is my local theatre, but I haven’t been for a few years. There used to be a series of excellent productions once a year which sometimes moved on to the West End such as “The Invisible Man” and “Zorro” but I think the moving force behind these died, and the raison d’etre for local theatre has moved more towards serving the perceived needs of the local community, a community which arguably doesn’t really exist except from a political or funding point of view. But the playwright is Bonnie Greer, an accomplished writer and whose performance on TV the other night in Question Time I think it was, well she just outshone everyone else on the panel.

For the Sunday Herald in August 2006 Bonnie Greer said “I wrote this basically because the information has been suppressed, and if you don’t control the information, it controls you. That’s certainly true in the case of Marilyn Monroe, who was a victim of information control even after her death. She was the biggest movie star in the world and she made this kind of stand for Ella Fitzgerald. People at the time didn’t understand it, so they glossed over it, and now not many even know about it. Which means that it has never really been celebrated.”

Interestingly, this musical stage play began life on Radio 4 as “Marilyn And Ella Backstage At The Mocambo” and then at the Edinburgh Fringe in 2006 as “Ella Meet Marilyn.” The play has been competely re-written for the 2008 production, and if it has been crafted skillfuly for Theatre Royal Stratford then there’s every chance of a West End transfer in due course.

So part of my anticipation is to see if the question of the emancipation of the excluded black people as a whole class is brought up or glossed over through focussing on forging a pathway for the very few to rise up to become celebrities, leaving the masses behind them. The Marilyn Munroe icon has become a symbol of celebrity itself, so there are some interesting mixed messages inherent in the subject matter. The part of Ella Fitzgerald is played by Nicola Hughes who has been in Porgy and Bess and Chicago and Wendy Morgan from A Street Car Named Desire and The Bill is cast in the role of Marilyn Monroe. So that’s two very brave women to go on stage and play those huge stars.

I’m also going to enjoy the chance to hear some great songs performed live on stage.

Someone To Watch Over Me; My Funny Valentine; Baby, It’s Cold Outside

Wonderful old classics with which I am familiar not from the Jazz legends themselves but from the great covers sung by Mari Wilson in the nineteen eighties.

They Can’t Take That Away From Me – Lady Is a Tramp – Bewitched. Bothered and Bewildered – Every time We Say Goodbye – Just Two Little Girls From Little Rock – The Man That Got Away – Diamonds Are A Girl’s Best Friend