Theatre breaks in London for those who can get away midweek

For theatre lovers and those who enjoy short theatre breaks in London there are some seriously amazing bargains to be had in the New Year, summer and autumn seasons for people like myself who are not tied to regular 9 to 5 weekday working hours. Even if you have to book one day’s annual leave on a Wednesday in February, a Friday afternoon during the schools summer term or something like that it will be well worth it, because one of the best online theatre breaks booking sites is often offering special cheap deals for hotel theatre breaks with the show on a Monday, Tuesday, Wednesday Thursday or Friday. You won’t believe it….. sometimes one night in a three star *** London hotel is free with a range of top theatre show tickets!

I know it seems strange. It’s well known that city hotels are mostly used by the business community travelling on expenses, and therefore have over capacity at weekends. So you would think that the bargains would be for weekend theatre breaks, but apparently not. London is not quite the same as Norwich or Basingstoke, people come here from all over the world and also from the UK for a variety of reasons. Intercity trains are packed on Friday evenings as weekly commuters migrate to and from the capital. Office workers, teachers and civil servants are required to work weekdays with precious annual leave saved up mostly for a couple of weeks in the sun, and restricted logistically by school holidays.

So if there’s any way you can possibly slip away on a Tuesday afternoon with the next morning off, take a flexi-day, or if you are one of the growing band of self-employed perhaps, choosing your own hours and working from home for instance, then you are in a position to save hundreds yes hundreds of pounds by booking a midweektheatre break in London with hotel and show

There were eleven great musical shows and two plays which qualified for the summer 2008 offer.

All you had to do to get the free London hotel deals was to keep within the 13 qualifying shows, choose a weekday before September 7th 2008 and then pick one of the first hotels that comes up, with the golden “offer hotel” badge.

then start looking forward to your best ever summer theatre break in London.

The great news is the number and class of hotels that are available for this July free theatre tickets offer:

So all you have to do is choose a combination of one from the six top hotels and one from the seven great shows and book for a weekday between now and the end of July ( dates excluded are 20th June, and 14th,15th and 16th July) – which means the first week or two of school holidays are included in the cheap theatre break offer!

By taking advantage of the special summer deal you can get the cost of a London theatre break down to as little as £70.50 per person for a posh central London hotel with free theatre tickets and full breakfast included.

Below is a description of the previous New Year offer which ran until March 2008, but the upgrade for £10 is also valid for the August 2008 free hotel offer :

You wouldn’t have been able to get the free hotel offers for the week beginning February 11th because that was half term for most schools, but the following week seemed to suit others, although just a few shows are restricted that week as well. The best thing to do is to get out your calendar, consult your partner or family and then visit the booking site and see what you can come away with. My advice would be to probably avoid the Friday matinees if you want to see the top stars because they seem to arrange for the understudy to have a go for some of these performances. You should be warned if that’s the case anyway. 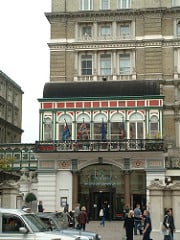 The theatre breaks free hotel offer is for a three star hotel in London midweek which is bound to be lovely, but you can also upgrade to a four star for only £10. I recently stayed in a four star hotel myself so I made this list of what extra luxury you might expect from one:

* Enormous comfortable beds – sleep perpendicular to your partner!
* Luxury bathroom – endless hot water with top quality foam and big fluffy towels
* Free breakfast ad lib – real coffee with abundant food of all types in smart surroundings
* access to sitting rooms, bars, views, gardens and terraces
* WiFi, cable TV, mini bar etc
* If you forget your toothbrush, comb, shower cap or anything like that don’t worry there’s one for you already there.
*interesting gadgets to play with, like a whirlpool, desk hairdryer or trouser press.

I suppose what I’m saying is that the show tickets are the main reason for, but not the only component of London theatre breaks. With the amazing show and hotel offers it’s going to be affordable to add little extras like a ride on the London Eye, pre-theatre meals or entrance to the Tutankhamun exhibition in Greenwich. Remember, the offer ran until mid March for theatre breaks midweek bookings as long as the show was before March 14th 2008, excluding the week beginning February 11th.

**Book London Theatre Breaks with show and hotel in 2010**