Reflection on keeping an Action Log for a month

Reflection on keeping an Action Log for a month

Reflecting on the process of Action Logging

Having meticulously kept up my Action Log for one month now, it’s time for me to reflect on the process and the implications for my practice as a self-motivated online worker.

Some thoughts about the Action Log in practice have been burbling away, somewhat informally near the front of mind in the past week, especially since writing up the examples. So now it’s time to use one of the reflective models to scaffold a deliberate piece of reflective writing and discovery. I’ll turn to the Gibbs’ Reflective Cycle model based on the simple diagram below: 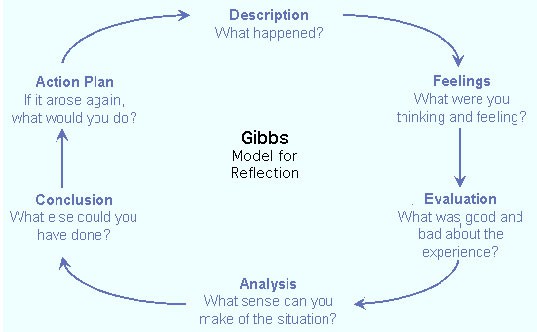 I took to Action Logging quite readily, keeping up the short daily notes from 16th April until 15th May and have continued since. There is only one day off without any actions at all recorded, a deliberate day off. Apart from that the number of actions recorded varies between 1 and about ten, but of course the size of the actions varies enormously. Most if not all of the records are still meaningful, so a working log of all the various additions and adjustments made is now available to me, each tied to an exact date. After two weeks, I started dividing the days up into AM and PM, sometimes adding EV for evening. I very rarely had to go back and fill in a previous day’s log, but regularly use the browser history now, to check back over the past half a day or so to refresh my memory of where I’ve been and what I’ve done.

Feelings – what did I think and feel about it

I felt good about it. Satisfaction that I was indeed getting things done, and not just whiling away time browsing and checking. Sometimes it would still feel that the only things to show were quite small things, but better than nothing. A little bit of wonder that I seemed to have come up with an idea that was really taking me forward through instilling the beginnings of a good habit of self discipline. Later on some self doubt began to emerge, as I began to suspect that I might be letting myself off from some larger tasks by making do with having achieved some small ones. A slight sense of waste that I might be expending energy on accumulating valuable data without having any formal plan for getting around to actually using it.

Analysis – What sense can I make of it

Keeping an action log is giving me a sense of reassurance at least, and quite possibly that very act is making sure that at least a minimal number of concrete positive are taken each day that go out into the world and stand a chance of having an effect. Almost certainly. Once logged, however, nothing else is happening to them at present. It’s got nothing to do with testing and tracking, but perhaps something to do with probing, pushing, and building.

I think it’s also quite healthy to have a sense that there also need to be some checks and balances to makes sure that some longer term goals and bigger tasks are being addressed. That’s fine. At this stage, the greatest achievement is to find something that seems to be working and largely stick to it.

Conclusion – what else could I have done

That’s a hard question, which is a good thing in some ways, or am I failing to spot something that’s missing? Maybe I should have recorded some reflections on the process as I went along, so I would have more to chew on now.

Action Plan – What will I do differently next time?

Mostly I think I shall declare this first cycle of my 1st person Action Research a productive one, and aim to introduce modifications only gradually. Steady as she goes.

I’ve always insisted that the Action Log method is not a complete package, it’s just a useful tool for use in a situation that might already be a bit out of hand. It’s almost an emergency remedy, a blunt instrument of rescue. Once the patient is stabilised, we can then start to introduce solid food and gentle exercise.

This has to be in the form of some kind of planning or task list, but still keeping the main focus on the actions getting done and logged, avoiding the tyranny of being surrounded by lists of things not done. I’m starting to imagine a supplementary system which is like a kind of ‘lucky dip’ of additional tasks that could be done, nice ones, interesting but necessary ones, without any deadline. The lucky dip will sit somewhere a bit more at arms length, and every so often when I think of something appropriate I might add it in. The lucky dip shouldn’t grow in size to more than about 50 tasks, and they should be things of a size that the whole lot could be cleared in a month if it was decided to concentrate just on them, but that isn’t the plan. The plan is that every now and then when I come to a juncture in my activities, I might decide to go the lucky dip and pick a task to do straight away. That will then give me something to put on my action log for the day.

For the sake of completion it’s customary to reflect on the reflective process itself so without disappearing up my own whatsit, I’d like to record that I’ve noticed that while this piece of reflective writing has not gone into any really deep reflection, it has spontaneously produced a very clearly defined action for my second cycle – implementing the “Lucky Dip” list.

This paragraph doesn’t really belong here but I postponed it once already.

I suggested a private space online, a text document or a physical notepad. Another alternative which Bill observed is the idea of using a twitter account. I can see how that might work, especially for people who can take advantage of mobile access to send in some action records while on the move somewhere. There are some disadvantages as well, such as the clunky interface for accessing archives but I suppose you could always pull in the RSS feed and archive it yourself. The main point would be to set up a separate twitter account solely to log the actions, and not expect it to attract and retain followers, or even try.