Loading up a small boat with lobster pots ready to put out from Anstruther in the East Neuk of Fife. 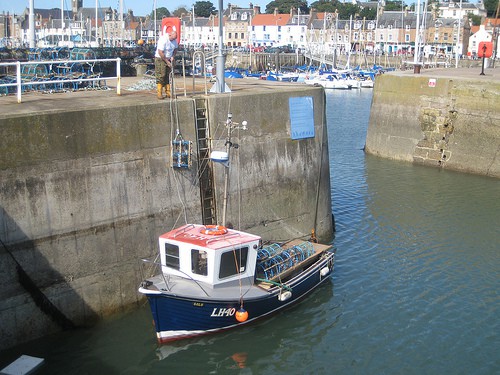 I’ve always been fascinated to watch the comings and going in these little fishing village harbours in Cornwall, France, Spain and now the east of Scotland.

“We watch the working boats come in,
to see what they have caught”.

The lobster pots in Cornwall landed in little harbours such as Coverack but also Newlyn used to be made of wood and wire but now they seem to be mostly plastic. The mouth lets the lobster enter a funnel shaped tunnel into the main chamber where some enticing bait is waiting. Then they can’t find a way out again. Small boats drop the lobster pots several at a time over the sea floor in known lobster feeding places, marked by a floating buoy so they can be picked up later. Those floating buoys used to be made of coloured glass and many found their way into Cornish pubs as ‘tasteful’ decorations.

Lobster Pot fishing is all about setting the baited pots in a known lobster habitat and then coming back in a boat to see what’s crawled in. This video “Mark & Dennis Chapter 2 Lobster Pots” taken in Dorset off West Bay captures some of the excitement of hauling in the lobster pots and seeing what’s there.