This month sees Facebook rolling out major changes on their social networking structure, appearing to embrace the concept of social objects and placing them on a par with the people in the network, which is where they should be. The changes are modest in terms of technical functionality but potentially could be very big in effect, depending on how people come to use them. 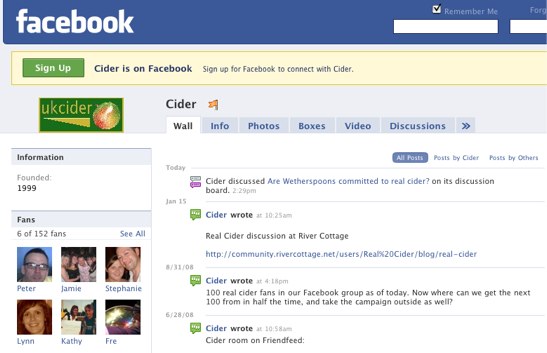 Facebook’s “pages” with “fans” have been around for a year or so, but were implemented as poor relations to personal profiles, not having the ability to push updates out into the newstream. Anybody can create a page for any purpose, so pages can become anchors for topic based conversations, a bit like friendfeed rooms or Flickr groups. On the micro social objects scale, pictures, videos, discussions and status updates added to the Facebook pages will be broadcast out into fans news streams, with the potential for remarkable topics at the pages level to gain traction a lot more quickly than before.

Social Objects theory says that successful social networking sites work best when they enable easy relationships between people and social objects, not just between people and other people. Facebook pages have unique permanent URLs which are expose to search engines, so they are very different from the original college student private profile pages Facebook was founded upon. It’s likely though that much of Facebook’s huge existing userbase is going to be a little confused by this big departure from the longstanding culture of limited exposure to vetted human nodes in the network (friends).

By the way, I’m using the term Social Objects here in it’s strictly European scientific sense, unlike the diluted idealist form that has muddied the theoretical waters somewhat in the past year or so.