The World Health Organization today said last week it was getting closer to officially declaring a Swine Flu Pandemic Level 6 and level six is the highest level you can get, reflecting the global spread of the type A H1N1 Virus. Now on Thursday 11th June, that declaration has been made

So it’s officially a pandemic, meaning it’s now everywhere, but the new strain of flu virus itself is proving to be a lot less severe for sufferers of swine flu symptoms. The percentage of deaths is remarkably low for a completely new strain.

The declaration of level six on the 11th June comes at a time when scientists have known it’s a pandemic for some weeks already but this is the first time the WHO has called a global flu epidemic in 41 years.

“The world is moving into the early days of its first influenza pandemic in the 21st century. The virus is now unstoppable. However, we do not expect to see a sudden and dramatic jump in the number of severe and fatal infections”

The WHO’s six phase system for declaring a pandemic focuses on how widespread the disease is, not how dangerous. The organization’s flu chief says the disease has reached 64 countries and infected nearly 19,000 people, so it’s well on the way to becoming endemic everywhere. The danger then, is of the new virus mutating further into a strain that is more deadly than that currently spreading.

While the overwhelming majority of cases have been reported in Mexico and the US, the swine flu is increasingly spreading from person to person all over the globe, causing more than 100 deaths worldwide. The WHO calls the situation “moderate” rather than “mild” while some experts have reported patients with symptoms different from those expected and the virus is causing severe infections in some healthy, young adults. A worrying sign.

What is a Pandemic Level 6? 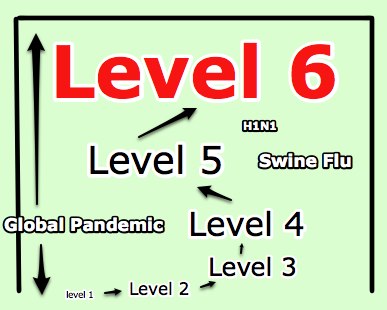 Swine Flu has been spreading geometrically from human to human in both North America and Japan in Asia for more about two weeks so why is the WHO still waiting to declare a level 6 pandemic?

Well, at a World Health Organization meeting on May 18th, 2009, several countries urged the agency to use great caution in deciding  whether or when to declare a full-scale pandemic. UK Government  Health Minister Alan Johnson was the leading voice for caution, according to press reports from that meeting. He warned that moving to phase 6 could unnecessarily trigger costly and risky actions such as switching from production of seasonal flu vaccine to pandemic vaccine, even though the virus so far seems mild.

Johnson said a pandemic declaration should also reflect the severity of the disease, not just its geographic extent, thus changing the agreed protocol designed exactly for such a situation.  “It’s very important that that’s reflected in your ability as to whether to move from 5 to 6,” he said. “So I would like to propose that you have more flexibility in that rather than follow a mechanistic process.”

Johnson was backed by New Zealand, Switzerland, and the head of the Pan American Health Organization, according to reports.

Origins of the Swine Flu Pandemic

Thought to have originated in Mexico the Swine Flu Pandemic could have been avoided with better animal husbandry. If you’d like to see industrial pg production regulated then sign the petition to investigate and regulate factory farming:

To Dr Margaret Chan, Director-General of WHO and Dr Jacques Diouf, Director-General of the FAO: We call on you to investigate and develop regulations for factory farming in accordance with public health safety standards. Food production must be regulated to ensure global health security

The number of confirmed cases of H1N1 swine flu rose above 1,200 in Australia on Monday June 8th and the type A flu virus is no longer restricted to schools and other institutions in that country. This suggests strongly that a community-wide spread has begun. Such a spread in a region outside North America, where the swine flu virus originated, is the primary criterion for raising the alert level to Phase 6 so why the delay?

WHO officials worry that a pandemic declaration would lead people with mild illnesses to flood emergency rooms and might lead to border closings, travel restrictions and other “unwarranted” actions.

In the early stages of the current outbreak, Fukuda said, people stopped eating pork, pig herds were killed, and imports of pork were restricted by some countries. “These are the kinds of potential adverse effects” that the agency is trying to avoid, he said.

Reporters repeatedly pressed Fukuda about why, given the clear spread in Australia, the agency has not increased the alert level. “We are really getting very close to that,” he said. “We are working very hard to ensure that everyone is prepared for that.”

In an effort to mitigate over-reaction in response to an increase in the alert level, the agency last week decided to augment the current warning system with three tiers inside Phase 6 to indicate the severity of the pandemic. Barring changes in the next few days, the agency will most likely indicate that the severity is at the lowest level when the stage is raised, indicating that the virus is spreading through populations, but that its effects remain relatively mild.