I have written about swine flu recently from an epidemiological point of view but now, unfortunately, I’m in the position of being able to provide a first person account of the disease as it progresses in my own body.

I’ve been ill for two days, not had a thing to eat, and the symptoms showed no signs of easing up. Then the sore throat and cough started up, adding to the intestinal discomfort. Temperature still fluctuating, so it was time to call the GP. Linda phoned in for me, but could only speak to the nurse and they made an appointment, if you call it that, for a doctor to call back and talk to me which they did a few hours later. After a question and answer session which I was really not able to cope with very well, she decided I needed Tamiflu which is being sent out to chemists, not on prescription but as part of the emergency preparations for the swine flu pandemic, or any other flu pandemic for that matter such as avian flu ( H5N1) which is also on it’s way perhaps, but was suddenly overtaken by the swine flu A H1N1 virus, first reported in Mexico. 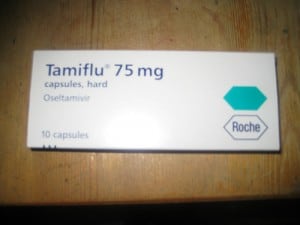 So anyway, after some fussing over which was the nearest chenist and whether they had stocks yet, Linda went out to get the tamiflu. Apparently there was a queue of people there, all for the same purpose, so this gives an idea of how widely the swine flu has spread around London now. No hype, it’s here amongst us and multiplying fast despite it being high summer in England now.

The tamiflu arrived and I’ve taken one tablet so far as well as some rehydrating fluid. It’s too early to expect anything positive but adding nausea to the symptoms was most unwelcome. Unpleasant as this is, not to mention extremely inconvenient (we were due to go out to the theatre tonight) it’s generally less severe than ‘normal’ seasonal flu. Not the headcolds that some people call ‘flu but influenza. 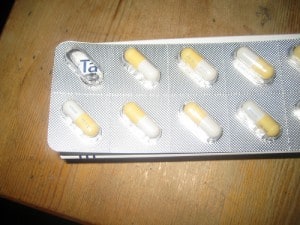 Thanks to the people who sent well wishes via twitter and facebook etc, and for suggesting I might as well write about it – it’s a useful distraction in between times. For those concerned about Linda, she’s not 100% but doesn’t seem to have gone down with the swine flu, which the doctor said would usually be both at the same time, but there’s some evidence that people who had Spanish Flu in the 1967 epidemic have some residual immunity.

PS: The Symptoms of Swine Flu

People might need to know so here are the symptoms in order of appearance in my case – for others it may be different. Look away now if you don’t want read it.

The only one missing is muscular aches and pains I think.