No breakfast before going out on a Saturday!?Â  The reason why I was in a hurry to leave the house early yesterday was to get to the Open Plaques Open Day at the Centre for Creative Collaboration near Kings Cross Station. 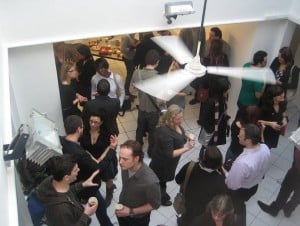 I know the venue from the Tuttle club, which I have attended once or twice there. The Open Day was due to kick off at 09.50 with a presentation by Frankie Roberto about “How We Got To Where We Are” which I didn’t want to miss. Well, I did manage to get there in time, despite the fact there were no trains at all on the Circle, Hammersmith and City, and District Lines in that direction. (Weekends are a bad time to get about in London, midweek breaks are better).

So Frankie talked a bit about how he sent out a tweet once wondering if there was a database somewhere of Blue Plaques, and how the answers came in suggesting things, none of which were at all adequate. The best resource available was a single page on one of the plaque erecting organisationÂ  sites. So he scraped the list into a database and started trying to parse it into meaningful data, using his linguistics abilities.

Another useful source of information would be the pictures on Flickr, and these could be geotagged which then provided a link into the new Open Plaques database. Once the people at Flickr had made a blog post about the Open Plaques group and integrated the special tag

ging into Flickr itself, then there was no turning back. Open Plaques could not be switched off, it was now more than just an experiment. The provision of an api to send the data out again meant that satellite applications could be built by creative people

and these would find new and unthought of uses for the growing system. There was also a graph which showed the steady growth in numbers of plaques added during the lifetime of the project. This graph could be expected to turn dramatically upwards once there is an easy way to add new plaques, which at present requires somebody from the “core team” to do it!

Next up we had Ian Ozsvald using a subset of the pictures of plaques as an AI research project to see how well they could get OCR software to recognise the writing in the plaques. This makes a nice real world example dataset which can help to advance the science of artificial intelligence and character recognition in the real world. The vision is that one day soon you will be able to simply wave your phone camera about in a room and it will automatically detect any faces present, take a picture of each of them and store it with their names and the geolocation of the place on a map, as well as read any text that is being displayed in the room, on the walls or from a projector for example, and store that as well with the date, time, place and list of attendees etc. It can’t be done yet, but this will be mainstream in just a few years, he said. Is that scary? Then an iPhone app which is being built to show all the plaques nearby as pins on a map which you can get information about. The future is mobile, and anybody who isn’t intending to get a smart phone within the next twelve months might as well just go and live in a cave somewhere, cut off from all of technical society. And a mobile app that turns it into a game, which has gone through some transitions. Based on a treasure trail type model, the app ended up giving out directions for how to get to the next plaque, so that was just too easy and not fun. The clever idea was to take a picture with your back to the plaque, of the view from the plaque as it were, which can then be used in a “Guess where Plaque” game, with the numbers on the plaques adding up to link references which tells you where the pub is. Some of the people just wanted to take a short cut to the pub though, which is fair enough.

So then we broke up into groups to try and further the project from different angles. One team discussed the future direction from from the developers point of view, one looked at design I think, and the group I joined discussed content. We brainstormed about “who are the different types of users” who may have an interest in Open Plaques, both current and potential, came out with some wistful ideas for addons and expansion, hammered out the concept of what a plaque is, looked at the different page types, the additional information that could be included within the database or on a specific page, and suggested new functions and concepts. If it came down to just one new facility that would make the biggest difference that would be the ability to Nominate a New Plaque which would then sit alongside the existing plaques as a ‘virtual plaque’. I chose this as the most important because it’s a disruptive move which takes the initiative out of the hands of the few organisations who very slowly make the decisions as to which locations or historical figures are worthy of a plaque, and puts it into the hands of the ordinary person, or the ordinary Open Plaques user. It was interesting to note that most of the small group of people present, some of whom admitted to being mildly obsessed with plaques, one who described herself as being a “plaques widow” and half of whom seemed to come from Brighton, all had a clear idea that somewhere out there would be the “ordinary Open plaques user” for whom the grand service is being refined and must be orientated. What the ordinary user, should such a group of people come into being at some point, will make out of of all this, of course has yet to be seen.

I found the whole topic a lot more interesting than I had originally anticipated to be honest, and far from feeling that I wouldn’t have anything to contribute, did my best to add in and highlight what I felt to be the most pertinent ideas. Using the theory of Social Objects it seems fairly clear that the principal page type and the url at which the casual visitor arrives should be the plaque itself rather than the person or place. The verbs then need to encourage contributions in order to help build out the community around plaques in general, and perhaps temporarily around individual plaques, probably asynchronously. “Add a Plaque”Â Â  “Edit this Page” or even “check in here” are contenders for prominent verbs on the page, but you have to remember that this is a small and in some ways unlikely project, that just happens to have gained enough momentum to become sustainable, but is unlikely to attract enormous resources for development and maintenance. Definitely something to keep an eye on though.