The Cooperative movement was born out a mixture of radical socialism and paternalist philanthropy during a period of upheavals and change. It was a group called The Rochdale Pioneers who established the first successful co-operative in 1844, starting a revolution which is still going strong. 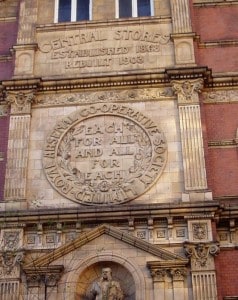 In theory the cooperative movement provides an alternative to capitalism by changing the relationship between the workers and the owners of business. In a workers coop the business is owned by the workers collectively, although it still has to operate in a capitalist marketplace. Not all coops are workers coops though. The coop retail service was a form which claimed to share the ownership of the enterprise with the customers rather than just the workers. Customers were paid a dividend, terminology deliberately derived from shareholders dividends, which was paid out periodically according the amount spent in the coop supermarket. This system degenerated into a stamps scheme, which ended up almost like green shield stamps and is mirrored today by the loyalty card schemes operated by distinctly non cooperative retail giants Sainsbury and Tesco.

There is much more to the Cooperative movement than the visible shops trying to compete on our high streets and retail parks though. Today in the UK, as well as The Co-operative Group with its six million members and 5,000 outlets across its family of businesses including food, financial services, travel, pharmacy and funerals, there are thousands of other co-operators who share the same heritage. The cooperative model is often the best way for rural communities to organise services such as broadband into areas where the big telecoms companies can’t be bothered to deliver. Alternative energy is another good example:

The UK’s first community owned wind farm, Baywind Energy Co-operative was established in 1996. The project has always favoured local investors, that way the economic benefits of the wind farm are kept within the community it serves. In 1998 Baywind secured a loan from The Co-operative Bank to purchase two turbines for their Harlock Hill site. It has also received several grants from The Co-operative Enterprise Hub to develop new, co-operatively owned wind farms across the UK. Baywind now typically generates around 10,000MWh of electricity each year – enough to power around 30,000 homes. And along with educational visits throughout the year, it funds environmental books for local schools. There’s even a Coop Facebook page now,which you can ‘Like’ to get updates. The Co-operativeJoin the revolutionGet involved