The BT Openreach vans have been busy in our area for months. The fibre optic cables were laid under the streets and up the telegraph poles, ready for anybody who wants to take advantage of the higher data speeds available with fibre optics, and to future proof homes connectivity. I’ve always had a pretty good service through the copper wires though, and since reliability rather than speed is my most important criteria, I elected to remain with my current sluggish and expensive but very reliable broadband provider. Well I would have done if I could have, but they had been taken over by another company, and then another in turn. So I was left on a legacy system yet again.

Finally, BT made me an offer I couldn’t refuse. Six months totally free broadband and landline phone usage, including up to £5 worth per month calls to mobiles, no setup fee, no line rental, no charge for the modem, free to opt out again at any time. Supposedly it’s a trial to test the new voice over fibre service. Whatever. I notice Sky TV are offering similar broadband deals so it’s probably more of an enticement, because we all know how powerful the force of inertia can be, once you’ve plumped for one service or another. 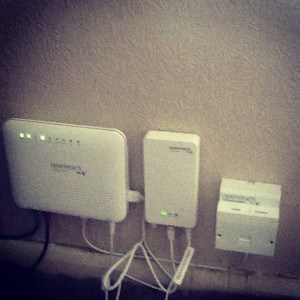 I’m happy to have my house cabled up with fibre optics, all the way to the modem. The old copper wire system is still there, and working as I type, so I have a choice of two broadband connections, luxury. The fibre optic system is about two or three times as fast for downloads and browsing, but more like six or ten times as fast for uploads, which is great when I have a series of half a gigabyte music videos to upload to YouTube for example. Even running in the background, the three or four hour uploads used to degrade the general internet access quality for everybody else on the network, but that’s no longer the case. And I can watch live streaming HD TV channels such as the BBC iPlayer at the same time as uploads and other stuff going on simultaneously.