On My Gramaphone Record Player

On My Gramaphone Record Player

I finally got around to setting up my gramaphone record player deck again yesterday after having a bit of a clear out during the week, to make some space. I’d mean meaning to do this for goodness knows how many years now, but you know how it is…

On the deck left over from whenever I last used it, and thus used as the test record to see if it the replugging was all working: The Rutles.

Great to hear old favourites like “Cheese And Onions” again. “The Rutles” album sounds just like an affectionate pastiche or a lost Beatles album, using similar sounding orchestration and composition techniques to those found on Sergeant Pepper, Abbey Road and other great Beatles records.

“The album contains some obvious send-ups of Beatles numbers such as “Ouch!” (“Help!”), “Love Life” (“All You Need is Love”), “Piggy in the Middle” (“I Am the Walrus”), “Doubleback Alley” (“Penny Lane”) and “Get Up And Go” (CD reissue only — “Get Back”). However, its real tribute is in its subtly layered blending of elements from many classic Lennon-McCartney tunes.” http://en.wikipedia.org/wiki/The_Rutles

After searching for the sleeve in which to put the vinyl record away, I found there was already another copy of the disc inside, which means I had two copies for some reason, and the one I had played was in much worse condition, which may have accounted for the slightly disappointing sound quality coming from the undersized loud speakers I had connected, and the way the record deck amp was connected through a mid range compact HiFi system.

Next up, after hearing Steve Tilston play one of his oldest songs “Normandy Days” in Maggie Boyle’s kitchen I was looking for his first “An Acoustic Confusion” album but instead out came “Songs From The Dress Rehearsal” his 3rd album, from 1977. Despite not having heard the songs for a decade or more, most sounded welcomingly familiar and beautifully recorded. After the worn out Rutles LP, this one sounded much much better with Steve Tilston’s voice in his mid 20s I think, mature and confident, always a technically impressive guitar player, here with very sympathetic arrangements. Now the advantage of analogue sound over compressed digital could be heard loud and clear with gorgeous acoustic bass, harmonica, voice and guitar separation. The single fold album cover has one slight problem though – the sleeve notes are printed over a black and white photograph and this makes some of them unreadable! This part is clear though:

“All the songs were recorded as played with only the minimum of overdubbing and I think a very good live sound is the result, totally approaching a performance and not at all like the vivisections that I’ve found myself taking part in before – in fact the session was so relaxed you can almost hear me smiling on some of the songs” 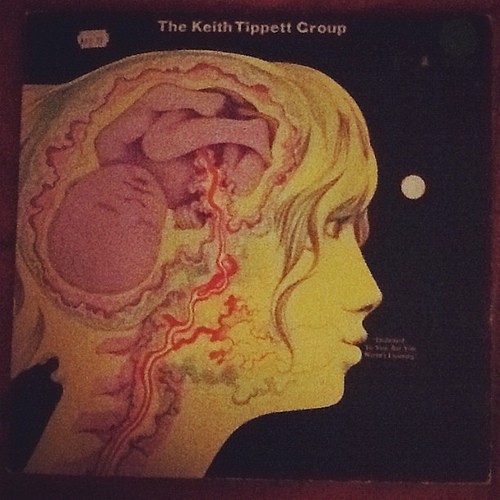 I was chatting to Patrick Hadfield at the London Bloggers last week, who had a ticket to see Keith Tippett, still gigging apparently, which put me in mind of the great album I own called “Dedicated to you but you weren’t listening”. I decided at the time this would be the first record to go on my new set up, but it ended up 3rd but but no means last.