The Royal Barge Gloriana was also used spectacularly in 2012 on the day of the opening ceremony for the Olympic Games, carrying the Olympic flame downstream along the Thames towards the Tower of London.

The £1m royal barge Gloriana, which led the river pageant during the Diamond Jubilee in June, was rowed by 16 crew, who were chosen from a squad of 28 on-board rowers on the day.

A large size photograph of the Royal Barge being made ready for the Queen’s Jubilee river procession at the bank holiday weekend. The ‘Gloriana’ as the new royal barge has been named, was moored at Richmond upon Thames alongside a cafe boat with guarded access.

The photograph was taken from the middle of the river Thames, on board a cruise boat from Westminster to Hampton Court via Kew and Richmond. For more views of the Royal Barge taken from the riverside see the following slide show on Flickr. 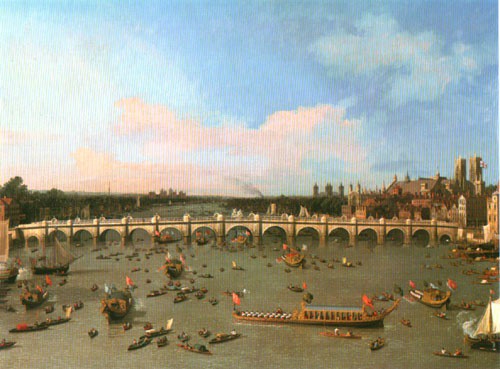 The Royal Barge is in fact a rowing boat, and will lead a flotilla of more than 1000 boats along the Thames for the Queen’s Diamond Jubilee Pageant On Sunday 3rd June 2012

It will be one of the largest flotillas ever assembled on the river. Rowed boats and working boats and pleasure vessels of all shapes and sizes will be beautifully dressed with streamers and Union Flags, their crews and passengers turned out in their finest rigs. The armed forces, fire, police, rescue and other services will be afloat and there will be an exuberance of historic boats, wooden launches, steam vessels and other boats of note.

The flotilla will be bolstered with passenger boats carrying flag-waving members of the public placed centre stage (or rather mid-river) in this floating celebration of Her Majesty’s 60 year reign. The spectacle will be further enhanced with music barges and boats spouting geysers. Moreover, there will be specially constructed elements such as a floating belfry, its chiming bells answered by those from riverbank churches.

Even my favourite cruise boat, The Mercedes will be taking part in the flotilla as part of the passenger boat section.