Twixmas for Singles from Lancashire

Twixmas for Singles from Lancashire

Twixmas – was there really such a great a need to coin a single word phrase to describe the period between Christmas and New Year? Well it’s better than just calling the whole festive season “The Holidays” I suppose like they do in the US. Twixmas is more precise anyway, it’s less than a week long for a start whereas “the season” can go on for months, starting from when all the mad shopping and planning begins and continuing right through the January Sales and pantomime season. I’m not terribly keen on the whole build-up and fuss myself, but I’m not opposed to the idea of taking a holiday at this time of year, if only to get away from all that.

I’ve spent several Christmases, late Decembers or Twixmases in Spain where they don’t make quite such a big deal of it all, or at least didn’t used to, until three Kings on January 6th by which time most of the UK has thrown away the tree and been back at work for a few days, and some have already started booking up next summer! It’s all just about bearable as long as you have somebody to spend the time with, usually. I spent a few festive seasons as a single person alone on alternate years during my kids’ childhood, mercifully not too many though. I hung about with own parents and their friends once, at a bit of a loose end, and I’ve also used the time to throw myself into new work projects with the promise to myself of a better holiday in the springtime. That can work, but one thing I never took advantage of is the opportunity to join a group on a package holiday type thing, to go away with a bunch of strangers where everything is laid on and just take it as it comes. A change of scenery, away from the same old four walls, somebody else doing the cooking and washing up, with a little bit of luxury and cultural interest are what’s on offer with one such North Wales Twixmas 4 day coach holiday offered via Omega Holidays and TBM Readers Offers, which is a new site in addition to our existing Theatre Breaks offers

The single person supplement is only £40, that’s just £10 per day for a single room instead of a double in the 3 star Celtic Royal Hotel, at Caernarfon. I know, it feels a bit like persecution to have to pay any single person supplement at all, especially if it applies to travel – that just doesn’t seem fair – so to find one so low is almost like finding a specially designed single person package – except it isn’t – and that’s probably just as well because you can imagine what some of those might be like. No, on this one there are likely to be mainly couples and small groups as per usual, but with a good smattering of single people taking advantage of the much more single-friendly pricing than that often offered more as a disincentive than an enticement.

Things to do In North Wales 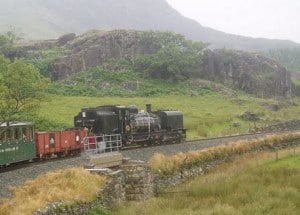 It’s not just about the pricing though, what exactly is there to do in North Wales at the top of the year? Well if it was me I’d be keen to take a ride on the newly restored Welsh Highland Railway which can take you from Caernarfon itself right down alongside Mount Snowdon, through the wonderful Aberglasyn pass all the way down to Porthmadog by the sea. That would make a brilliant day out. You’d have to find a way of fitting it in with the busy itinerary already laid on for you though, with visits to Llandudno, Conwy, Bets-y-Coed and Llanberis. I suppose it all depends how you get on with making new friends quickly in such a conducive environment. There’s nothing to stop you opting out of the coach tour day trip and go off on your own instead. There’s still the evening entertainment to catch up with everybody else on the Twixmas holiday. It’s a lovely part of the word and I think this would make a deeply enjoyable winter holiday break for anybody regardless of family status. 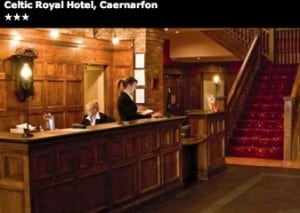 The prestigious Celtic Royal Hotel is a 3 star luxurious hotel in the famous town of Caernarfon, near Bangor in Gwynedd. It’s right in the town, between a nice green open space behind and the little harbour/marina in front and  has 110 en-suite bedrooms, a fine dining restaurant, a chic Art Deco bar, conference/meeting facilities, and a superb leisure club. Also:

Forget the trouser press, this is meant to be relaxing!  The 4 Day Coach Package designed by Omega Holidays can be joined from any of the following departure points, mostly in East Lancashire, North England: