There was an interesting short “Points of View” programme by Mary Beard on Radio 4 this morning about the attitude of people towards the displays of dead bodies from Pompeii at the exhibitions. She explained how the casts are made by pouring plaster of paris into the cavities in the lava rock left by decayed real bodies which were originally captured and buried by the molten lava flow from the catastrophic eruption of Mount Vesuvius in AD79. So in a very real sense, these are not bodies but casts, reproductions of the shape of the bodies, and in some cases they are in fact modern recasts made from the original 19th century casts.

Casts of the Victims of Pompeii

There is no doubt though, that they do impart a strong emotional reaction in people when confronted by the postures adopted by families about to be engulfed by hot lava together. There’s also a dog which evidently died still tied up, straining at the leash in a vain attempt to escape. Her point was that plaster casts of people who died 2000 years ago don’t inherit some kind of right to privacy, which is probably not contentious now, but was an idea that was knocked about when these kinds of exhibitions were first put on show. 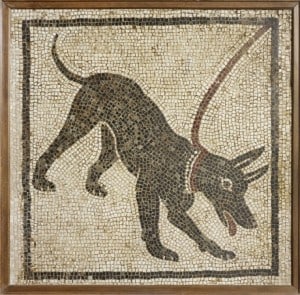 It’s no so much a point of view as a kind of trailer for the British Museum exhibition which is coming in March 2013 until September called “Life and Death in Pompeii and Herculaneum”. If the publicity is starting already, and it is, then this is going to an event that everybody gets to know about, and therefore quite a lot of people will want to go and see. So I suppose there will be queuing around the block again for timed entrance tickets, as happens with any major exhibition in London these days. Some people will even make a point of visiting London especially for the purpose of going to see the Pompeii exhibition as the highlight of their weekend break, by coach or train usually. Londoners themselves will mostly assume it’s too busy and not worth queuing up for, unless there is some kind of “speedy boarding” pass they can wangle through corporate entertainment expenses or something like that. Mary Beard herself had been to a similar but no doubt smaller show of artefacts from Pompeii in Malibu California and observed some reactions from visiting families, presumably Americans. When the children cried “erghh!! are these dead bodies real?” they were told variations of “Yes but they died a very long time ago so it’s alright” or “No, they are just models” which Mary argued were both true.

Then she went on to talk about the reaction to much earlier displays of the casts from Pompeii in the previous two centuries, and some interesting anecdotes about the state of the archeological buildings at Pompeii itself, which had been rebuilt twice, once after second world war bombing by the British, and therefore are kind of models or reconstructions themselves. Why did the British bomb Pompeii in World War 2? Was it because the enemy were hiding munitions there as a kind of cultural shield, and therefore it became a valid military target, or was it part of the strategy of demoralisation of the population that was adopted by both sides during the conflict ever since it had been proven to work in Guernica in 1937, but that’s another story, a song that has been sung.  The exhibition of Life And Death in Pompeii and Herculaneum is still to come, roll on the summer!

British Museum : Life and Death in Pompeii and Herculaneum www.britishmuseum.org/whats_on/exhibitions/pompeii_and_herculaneum.aspx