(This is a continuation of my reflections after the Prato dialogue which I began in a previous post.

Saturday concluded late in the evening with an informal demonstration by Etienne Wenger to the four of us occupying the upstairs appartment, of a useful little personal aide memoire program called “The Brain” (windows only) It displays information about people, organisations and documents using network diagrams, in way which is conducive to a connectivist and visual learning style. It was fun to discover that all of our names were already present in The Brain together with links to downloaded documents, in my case to my 2nd year paper about Introducing a Wiki to a Cop

I didn’t sleep well due to a pestering mosquito so I wasn’t quite with it in the morning, but needed to be aware of the time of my flight home. The suggested plans for the morning were still on the flipchart:

We decided there was just enough time to hold the hotseat right after breakfast, then walk to the river to see the “ponte vecchio” one of Europs’s last remaining inhabited bridges.

A ‘hotseat’ is really just a way of focussing a conversation on the experience of one guest while in the context of a host community. This had been mentioned by Derek the day before, as an alternative to the model of the expert addressing learners.
The practice seems to have been in use within Higher Education professional development for some years, and the structure can also be contrived in an online environment. We held many asynchronous hotseats during the time at Ultraversity, with some more useful than others, depending largely on the willingness of guest experts to engage with questioners and on the topic. One of the bones of contention was my suggestion that, rather than taking place outside of the learning communities in a separate “hotseat tool”, it would give the guest more context if they were invited into the usual platform for the period of the hotseat so I’m pleased that my first experience as a hotseat guest took place within an extended dialogue event which I was actively involved in.

Questions were asked to me (of those I recall) about the nature of the online degree course I recently completed, about the technology used to support learning communities, about Distributed Action Research, and about Barn raising for the development of Wikis. Remember this was a sitting around the table in real time type of hotseat, and so the only record is perhaps on Marc’s sound recorder. I don’t what happens to all of that audio but I wouldn’t want the job of trying to edit it into a useful form. 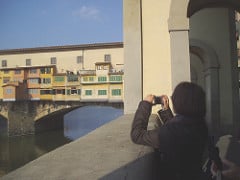 I found that I tended to use the questions as a starting point to try and tell stories which, I hope went some way towards answering and then went on to explain other ideas as they occured to me. Sometimes conversation would continue directly between others but then after a while, even without any formal chair, another question would be put to myself. The short time available went quickly for me, and we were still clarifying the idea of a COP convenor having the skill to identify a ’supersaturated solution’ type scenario as we walked down the grand staircase and out onto the streets to indulge in a short bout of sightseeing.