This is one of my flagship recipes, and one of my oldest. The first time goes right back to those early days in Paris when the two girls and myself decided to invite some friends around for a special meal – wild rabbit in mustard. They had access to recipes from Breton and Algerian parents so much more so than myself, they knew what they were doing, in theory at least. I helped, watched and learned. We lived right near a wonderful street market around the exit to Maubert MutualitÃ© Metro station so it was easy to buy all the ingredients including wild rabbit on a Thursday morning, ready for marinading overnight and cooking all Friday afternoon for the evening party. We were very careful never to let the stew boil, only simmer very gently, and to make sure the rabbit pieces were pushed down to the bottom and later, after the potatoes were added, that they were completely submerged. Almost a whole litre of dry white table wine was reduced in that stock, and the big pot of vegetables fed us for a couple of days afterwards, including chewing on the rabbit head.

So I’ve repeated this recipe with minimal variation over the years whenever I have a wild rabbit to cook.

You don’t seem to be able to get them with the head on in London, which is a shame. This is the first time I’ve taken photographs of the process though, so it will become a sort of pictorial recipe which should be easy enough to follow. I tend to feel that the whole point good recipes is to explain the process rather than to prescribe quantities, which are often made up anyway. So first of all, here is the raw wild rabbit, skinned and headless straight from the lakeland game butcher at Borough market in South London. 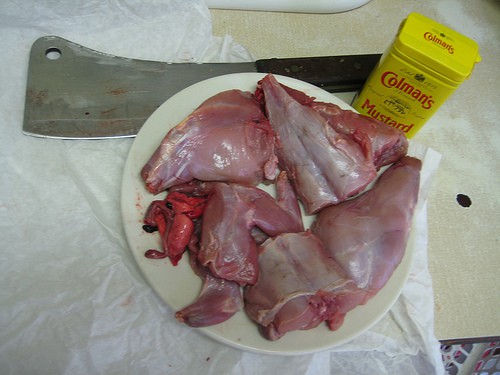 The rabbit is cut into about six pieces. Then the coating is made from Colman’s English Mustard powder, buckwheat flour, pepper and salt stirred into cold water with a dash of apple cider vinegar 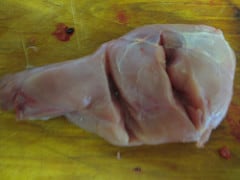 Make deep incisions into the thickest pieces of meat to allow the marinade to penetrate. 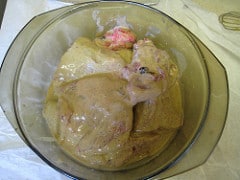 Coat each part on both sides, tipping the rest of the mustard mixture from the bowl over the rabbit then leave it covered in the fridge overnight. 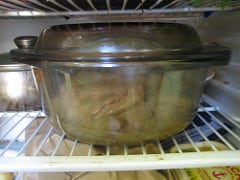 I had some leeks, potatoes, carrots and Muscadet dry white wine. It’s good to have turnips or swede too, maybe even parsnips but all cut into large chunks. Onions can be substituted for the leeks when out of season. 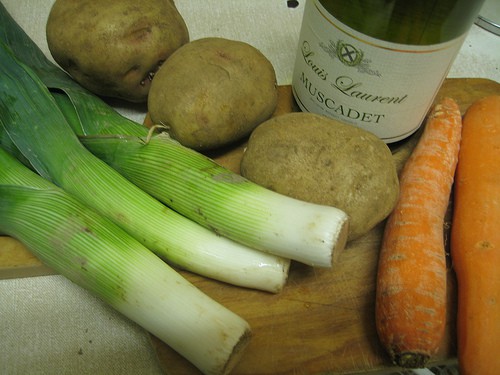 Placing the meat onto a griddle to brown the outsides. 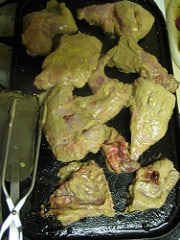 You could do this in a frying pan or in the large cooking pot itself. I used the griddle to save time while starting off the vegetables. 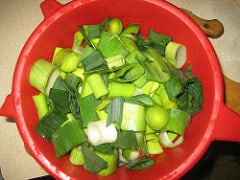 Now we’re ready to start cooking in the main pot

Softening some chopped garlic in oil, browning just a little of it. 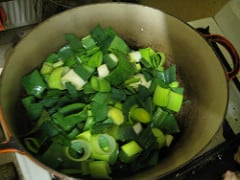 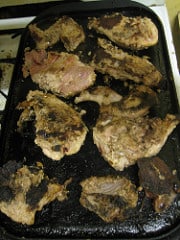 Add the leeks, then vegetables, while the rabbit sears on the hot griddle. Then transfer the rabbit to the main pot, and add white wine. 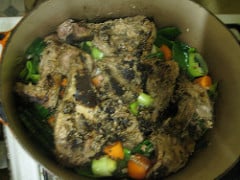 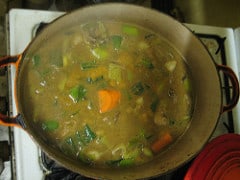 Couscous is a form of pasta, made from durum wheat flour, whereas quinoa is a true grain, or seed. I like the combination of any two from couscous, quinoa and rice but you can’t just cook them together at the same time because they require different cooking times. 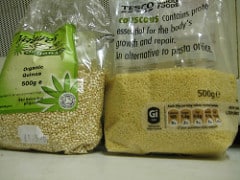 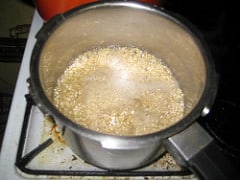 The Quinoa needs to be cooked in boiling water for about 5 minutes, whereas the type of couscous which we buy in packets is already cooked and just needs to stand in hot water for a few minutes to swell and absorb the water. It tastes even better if you use some of the liquid from the stew, and add a little butter and chilli sauce. 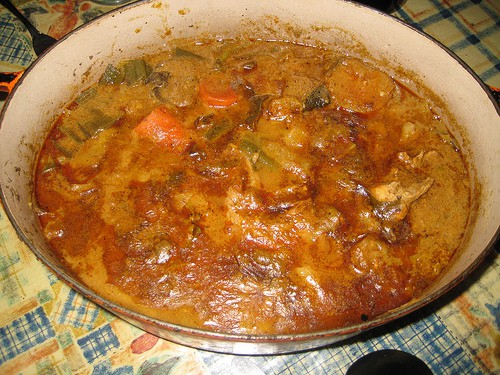 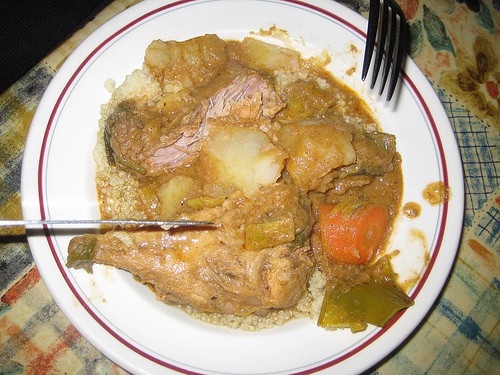 So there we have one of my favourite couscous recipes turned into reality on a plate: Wild Rabbit in mustard with couscous and quinoa