I was walking across Hampstead Heath on Saturday, and came across Kenwood House and grounds, which are freely open to the public. Inside there are painted rooms, and a lot of old paintings. mostly portrait s of long dead rich people. I walked into one room and went straight up to one painting remarking out loud “Ah, somebody has tried to paint a guitar”. Reading the inscription, it was by Vermeer – a well known “old master”. Looking closely at the guitar something was clearly not right. “It’s only got five strings ! How can she be really playing it when one of the strings is missing?“.

So it turns out that this was a very famous painting, Vermeer’s “The guitar player” In 1974, the painting was stolen from Kenwood House by supporters of the IRA, and found in a churchyard ten weeks later. 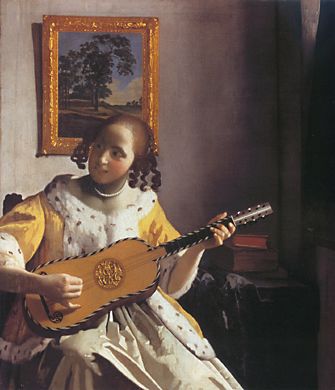 “This painting exudes a joyous energy that makes it one of Vermeer’s most appealing works. One can almost hear the chords of the music the woman plays, an effect Vermeer created by painting diffused guitar strings that seemingly vibrate from her touch. Indeed, the image’s spontaneity results largely from the vigor of Vermeer’s increasingly abstract manner of painting, as in the boldly unmodulated planes of color defining her dress. “

Except from Vermeer, the complete works by Arthur K. Wheelock Jr

Ok, so the strings are meant to be moving – that’s fair enough but there are still only five of them. 1670 is quite a long time ago though.

“Vermeer’s compostitional organization my be linked to his decision to depict a guitar player rather than a lute player. The guitar was just coming into vogue in the late seventeenth century as a popular instrument for solo accompaniment. The music it created was bolder than that of the lute, in large part because its chords produced a resonance not possible on the lute which had begun to take on associations with an idealized past, a sophisticated era where music had been enjoyed and contemplated for the purity of its sounds. The bright and direct character of The Guitar Player thus, spoke more to the modern world of music represented by the guitar than to the conservative and contemplative traditions of the lute. “

The baroque guitar may be considered as having had its own particular history both in terms of its shape, tuning, sound and style. It was very often used as a solo instrument but, according to certain sources, also as an accompanying instrument. Even though it may be difficult to give exact dates, it was in use in the second half of the 16th Century until the end of the 18th Century in Italy, Spain and France. The baroque guitar is a lightweight instrument with a clear yet rich timbre that is perfect for accompanying the voice while still being capable of making itself heard in the company of other instruments.
It is used in continuo playing and is often included in ensembles with the theorbo, archlute, viola da gamba and other continuo instruments.

So the Baroque guitar does have 5 strings, or rather five courses of doubled up strings, in much the same way as my own prized vintage american 12 string guitar.