What are you trying to find out about Harvest Moon Time?

Last night I looked up and noticed what looked to me like a full moon, but apparently it’s actually the Harvest Moon tonight, Wednesday September 26th. Harvest Moon is not just a fancy name for the full moon at around harvest time, it behaves in a special way. Throughout the year the Moon rises, on average, about 50 minutes later each day. So when you get a near full moon close to sunset, that only lasts for a day or two. Then you’re back to waiting until later in the evening before moonlight appears. This used to be very important for farmers at harvest time in the days before electric lighting, Mercedes Benz tractors and bright halogen spotlights added to the rack of headlamps. That’s because near to the autumn equinox, which came this year on Sunday Sept. 23rd, the daily difference in the time when the moon rises is only by 30 minutes each day. So you get several moonlit early evenings in a row which is just perfec 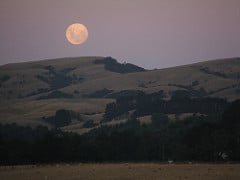 t for getting the harvest in. The Moon rises at about sunset tonight, and then not long afterwards for the next few evenings, as indeed did the one I noticed yesterday and the day before when it was noticeably less than full.

Now then, if you happen to be reading this in southern hemisphere, then it’s currently springtime and your full Moon behaves in exactly the opposite way. There will be an extra long time between moonrises from one evening to the next, which isn’t a particularly useful phenomenon, nor does it have a special name as far as I can gather, but no doubt you will get your autumnal Harvest Moon in March next year when we in the north are having our vernal equinox (March 20th 2008).