Following on from the idea of theatre breaks in London, weekend breaks are slightly trickier when you work all through week and need to unwind fast. My suggestion therefore is to sneak away as early as possible on the Friday, arriving in plenty of time to get settled in at the hotel and then go out and see something light and uplifting such as one of the popular comedies or musicals. Spamalot, Chicago, Lord of the Rings, Cabaret, Mama Mia, Fiddler on the roof etcetera. You can book the musical, hotel and train tickets all in one go to save a packet. 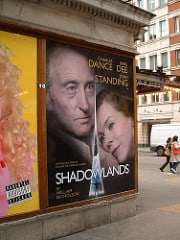 Then on the Saturday afternoon or evening, if you are a true theatre lover then why not take in a second show, perhaps a serious play this time. Just opened for example, is Shadowlands.

Shadowlands at the Wyndhams

Shadowlands is a serious play about the life of author C.S.Lewis and his relationship as an older man with Joy Davidman, an American poet. It’s an extraordinary love story which is both moving and intense, somewhat tragic but also uplifting on some level. The film version won a BAFTA and the West End play is a rare treat, showing only from now until the 15th of December, 2007 having opened on the 3rd of October.

Wyndhams Theatre is one of the grandest of the old West End theatres, which are all grade II listed buildings, both exterior and interior, on the Charing Cross Road, near Leicester Square tube station.

“I found myself more moved this time round than by the 1989 production: partly because it is rare now to find a West End play that addresses the issue of mortality, and partly because of the quality of the acting.
…this is a play about a man whose Christian faith is severely tested”

Blogger Lloyd Davis enjoyed it enough about it afterwards:

Lloyd is home having thoroughly enjoyed Shadowlands at the Wyndham’s.

The main performance is at 7.30pm but there are matinees at 2.30pm on Thursdays and Saturdays. If one were to book the Saturday matinee in advance therefore, or else chance being able to pick up same day tickets, then that might fit in perfectly. A full programme of theatre, comfort and sightseeing to make truly stimulating London weekend breaks with Saturday night still free for relaxing around town and Sunday afternoon to begin making a leisurely path homewards.