What is it about the grand hotels and theatres that makes London breaks ever popular? Something more than just the convenience I’m sure. Old fashioned style, social aspiration, romance maybe? The anonymous but attentive service combined with an expectation that everything you could possibly need will be there ready and waiting, or easily conjured up via room service. Modern life is relentless and for the most part let’s be honest, it can consist of following a series of rather dull routines so you don’t have to be an art intellectual or wealthy bon vivant to feel attracted by the idea of just one or two nights break in a smart central London hotel as a complete escape from the same old four walls, kitchen, relatives and other humdrum at home.

It’s not that I have any illusions as to what the image of London conjures up in many people’s minds. It’s a great big, busy, noisy city where the citizens are often tired and frazzled from over-stimulation, pressure and travel. They’d like a break too! London as a capital is nothing like Paris, Edinburgh or Cardiff and there can be resentment that so much political, financial and cultural leadership seems to be assumed to begin and end in London. That’s unfortunate in some ways, but then the sheer weight of population, history and connection gives London a momentum that cannot be ignored. Regional theatre may be more innovative in its creativity, and perhaps more intimate in the performance but it’s only when a show makes it to the West End that the bigger name stars can be attracted and the investment comes in for the stunning sets and longer runs. It’s the same story for music, fine art, dance etc. So people come on short breaks to London to see the best shows and soak up the West End atmosphere.

You see, London’s theatreland is quite a small area in the central part of the city which is a stamping ground not just for Londoners (many of whom may not go there for months on end) but for all people from every city, village and nation. On any day, weekend or midweek the culture vulture crowds are present in large numbers, ambling about in groups or couples, plenty of singles too. The lights and buzz hold an attraction for young people as much as the distant familiarity does for people who have been visiting London occasionally for one reason or another over decades. And much of theatreland has not been spoilt. That’s because the classic old theatre buildings themselves have been classed as grade two listed, both exterior and interior. So even when there is a poor year for theatre bookings, as happens from time to time, they cannot be pulled down or turned over for a completely different use.

This first map is just to give an idea of how London breaks up into distinct geographical areas with the red central area so much smaller than the great connurbation where the majority of Londoners live and work. 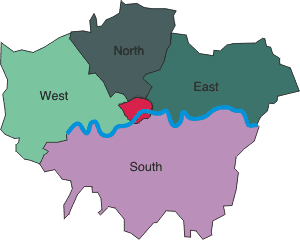 And theatreland is only a part of that centre. Arrival by intercity train for London hotel theatre and train breaks will mean a short journey from one of the famous mainline rail terminals into the centre and then you may not need to venture outside again or set foot in a tube or taxi until it’s time to return home, as long as you book a hotel which is inside the zone.

Getting to the Theatres

Here’s the street map of London Theatreland clearly showing each of the Theatres by name so it’s easy to find your way around. The same goes for the Hotels and restaurants which can be booked for pre-theatre meals, often very reasonably as part of a show, hotel and travel deal. 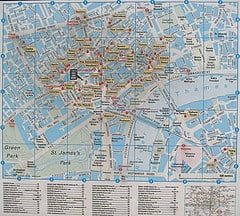 * The Vortex by Noel Coward with Felicity Kendal

Overall, London simply has a wider selection of fine international restaurants than any other world city. You can pre book as part of a London theatre and hotel breaks package, or just wander round for a short while until you are tempted. So ‘bon appetit’ and enjoy your capital.