The UK Statistics Authority run by Sir Michael Scholar is outside of government control, (like Torchwood) being answerable directly to the elected Parliament, not to ministers or any single government department. The USA has a remit to restore public confidence in the neutrality of government statistics, an urgent task since a survey revealed that only one citizen in five actually believes them! A poll by the European Commission about public trust in 27 member countries’ government statistics ranked Britain 27th out of 27.

USA can issue and take away a “kite mark” of quality assurance to each of the 28 UK Goverment departments which issue statistics, and will also act as a central reference for the vast amount of data which gets published. The website at www.statistics.gov.uk publishes a link to any new statistics which have been released daily at 9.30am, which is also available as an RSS feed

As another gesture towards open government, the USA will publish the minutes from their monthly meetings onto the website as well. Other plans for the website appear to include a new taxonomy and some kind of maps mashup.

What new figures are out today?

Today’s new stats include a tour of emergency services in Wales, Scottish manufactured exports for the last quarter of 2007 and a survey of construction industry materials but the one which caught my eye was a publication of UK Sea Fisheries Statistics for 2006.

UK Sea Fisheries Statistics provides a compendium of statistics relating to the UK fishing industry. It includes information on the size of the UK fishing fleet, the number of fishermen, key economic indicators and the quantity and value of sea fish landings, imports and exports. Comparisons are made with the fishing industries in Europe and the rest of the world. The level of exploitation of the main European Union quota stocks is also considered. 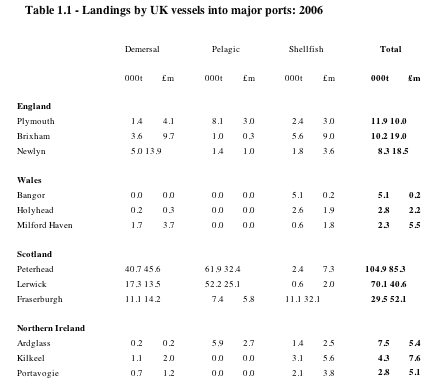 It’s interesting to me for example, to see how Newlyn in Cornwall compares with other large fishing ports but there’s also an overview of the world fishing industry

Here are some more tasty extracts:

In 2006, 41 thousand tonnes of nephrops were landed, a 35 per cent increase in two years. Landings of cockles fell to their lowest level for over 10 years.

This is all fascinating stuff but some of the vocabulary is unfamilar so I welcomed the opportunity to learn:

What are Demersal Fisheries?

Demersal fisheries target species which live on the or near the seabed and feed on bottom-living organisms and other fish. Although fisheries may be directed towards particular species or species groups, demersal fish are often caught together and comprise a mixed demersal fishery.

In 2001 the total landings by the Scottish demersal fleet were in excess of 130,000 tonnes and had a first sale value of around £150 million. Cod (Gadus morhua), haddock (Melanogrammus aeglefinus), whiting (Merlangius merlangus) and monkfish (Lophius

What are Pelagic Fisheries?

Oily fish generally swim in the pelagic zones of the oceans.

So to the consumer or cook, roughly speaking demersal = “white fish” and pelagic = “oily fish”. The oily fish live in the deep cold waters (clue) and the demersals are more coastal, except that the continental shelf extends a lot further out from some coastlines than others. And the Mackerel do come in close to shore in large numbers at certain times, as witnesse 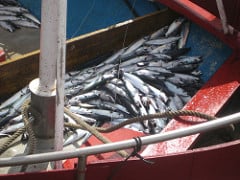 Back to the UK Statistics authority website, as you can see it has the potential to provide considerable distraction as well as having great educational and informative uses, quite possibly marketing and business use as well. Perhaps one day it will also be considered to set up an authority site for aggregating national qualitative data in a similar but appropriate way.