Have you Registered for your hour on the Fourth Plinth?

Have you Registered for your hour on the Fourth Plinth?

I’ve registered for a chance to spend an hour on the Fourth Plinth at Trafalgar Square this summer, have you?

The One & Other website opened for registrations yesterday and the idea is to get “representatives” from all areas of the UK to spend an hour each on the plinth to do whatever you like, as a piece of art lasting three months with a permanant archive.

It really is an opportunity of a lifetime: your chance to become a living monument; to join the likes of Horatio Nelson, George IV and those enormous lions.

The Fourth Plinth at Trafalgar square has been empty for some historical reason until it was decided to put on a series o temporary exhibitions and One and Other is just part of that series. Then when Mayor Boris replaced Ken Livingstone in an unfortunate electoral joke, the intention has been declared to end the series and erect another equestrian statue. Personally I would have been delighted if Alison Lapper Pregrant could have been secured as a permanant placement but that was not to be. The current piece of coloured glass “Hotel” is less impressive when not in full sunshine. 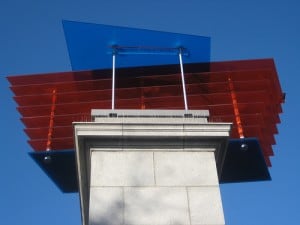 One & Other on the Fourth Plinth by Antony Gormley

One And Other is the title of the event created by sculptor Antony Gormley this summer on the Fourth Plinth in Trafalgar Square, London.

One & Other is the brainchild of the artist Antony Gormley, best known for iconic statues such as The Angel of the North and the figures on the beach at Crosby, Merseyside. He is asking people from all over the UK to help create an incredible living monument by standing on the Plinth, for an hour each, 24 hours a day, for 100 days without a break. We need 2,400 participants to make the Plinth their own, and we want to represent every corner of the UK in proportion to its population. So we’re looking for 277 participants from the North West, 71 from Northern Ireland, 304 from London and so on.

I’m actually a big fan of Gormley’s work. I’ve not seen the Angel of the North but I admires the sculpture outside the Millenium dome (now the O2) called Quantum cloud which I photographed from a boat on the river Thames: 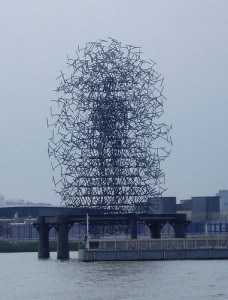 And also the collection of humanoid sculptures ‘Event Horizon’ which adorned many riverside rooftops along the river Thames in centreal London a few years back.

So that’s why I’ve applied to be on the plinth, because I’d be honoured if drawn, to have the opportunity to take part in a great work of art. I’m not so sure about the idea of representation involved in the selection process though. Over on the One And Other Facebook group I contributed this comment:

“I’ve registered as an individual because I don’t really understand how one person who happens to live in a particular postcode can be said to ‘represent a community’ in any meaningful way.”

But never mind that, the big question is:

If picked What should I do with my Hour?

and what will you do with your hour on the plinth?