Here’s an aerial picture of The Coombe Valley Raceway Banger Racing stadium in Dover Kent where I used to go on alternate Sundays to watch the banger racing, stock cars, hot rods and mini rods. They also hold special two day meetings to give people something to do on bank holidays. I don’t know how many other figure of eight racing circuits there are in the world but this is the only one I’ve ever heard of. Â The banger racing takes place in beautiful valley surrounded by wooded hillsides, typical of the East Kent chalk downs. 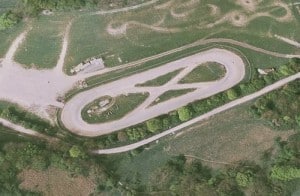 Here’s an amateur Â video of a big van bangers race which I think captures some of the excitement and chaos of standing on the bank near the approach to the pits bend.

Another one of a Bangers Destruction Derby