I must have been out of touch recently because I wasn’t even aware there had been a series of proposals for building a large tower at Stratford East London, to make a landmark art installation at the 2012 Olympics Site. Now the winner has been chosen and launched under the title of “The ArcelorMittal Orbit” or The Orbit Tower for short, by world renowned artist Anish Kapoor, with engineering by Cecil Balmond. 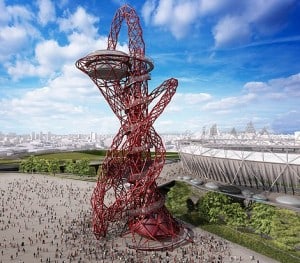 The artist’s impression unfortunately fails to excite the imagination of many Londoners who have seen it online, leaving comments such as “It’s a mess”, “bloooming ugly” and “looks like a rollercoaster that’s been in an earthquake”.

The problem is that artists impressions normally manage to make ugly things look ok, but on the other hand anything by Kapoor is unlikely to look ugly in the flesh judging by his impressive list of current achievements.

Standing at 115 metres tall, the Orbit will be slightly taller than Big Ben and the Statue of Liberty, twice the height of Nelson’s Column, just short of the Great Pyramid of Giza and considerably shorter than the structure to which it is being compared – the Eiffel Tower.

As well as the aesthetics, the Stratford Orbit Tower is likely to be controversial for economic reasons. Boris Johnson, London’s current incumbent Mayor has spoken at the launch citing the need to justify all the investment that is being made in East London.

The structure gets its formal name from steel magnate Lakshmi Mittal. Mittal is the richest man in Europe, and he is the one funding the whole project. He said that this project is an incredible opportunity to build something really spectacular for London, for the Olympic games. This is something that can play a lasting role in the legacy of the games.

Mayor Johnson said that the structure will cost around £19.1 million to build. He went on to note that he is sure that some people are going to think that they are nuts, in the depths of a recession, to build the biggest piece of public art that Britain has ever seen. However, they are certain this is the right thing for Britain, and work has to be started on it right away.