Airports all over the UK have been closed by a volcanic ash cloud spreading from Iceland where a volcano has erupted. The fragments in the ash cloud are said to represent a serious threat to airline engines, so the closures however inconvenient, are on safety grounds, starting with Scotland and now affecting London’s Heathrow Airport as well.  But how do you pronounce Eyjafjallajoekull? ( also spelt Eyjafjallajökull and Eyjafjallajokull)Thanks to Louise Joly for providing the link to a sound file which answers the pronunciation question:Eyjafjallajökull.ogg 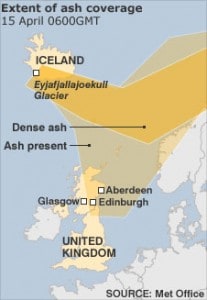 In Icelandic, when there are two L’s in a row, like in Eyjafjallajökull, the first L sounds like a T

More information about the volcanic ash cloud coming from Iceland

The International Air Transport Association (IATA) issued its “conservative estimate” of lost revenues as more than £130m a day because of the disruption caused by the volcanic ash cloud that has brought Britain’s air transport network to a halt. Flights were cancelled across northern Europe for the second day in a row, and the combination of continuing volcanic emmissions with still weather conditions mean the ash cloud could last for a week. The final bill to the global airline industries could be much higher when the cost of looking after passengers and getting services running again is included.

Eyjafjallajokull, the Icelandic volcano that has continued to belch lava, ash and steam since first erupting last weekend, isn’t the direct
problem. It’s Katla, the noisier neighbor, that’s the concern. If lava flowing from Eyjafjallajokull melts the glaciers that hold down the top of Katla, then Katla could blow its top, pumping gigantic amounts of ash into the atmosphere.

Scientists say history has proven that whenever the Eyjafjallajokull volcano erupts, Katla always follows, the only question is how soon.

Iceland’s Laki volcano erupted in 1783, freeing gases that turned into smog. The smog floated across the Jet Stream, changing weather patterns. Many died from gas poisoning in the British Isles. Crop production fell in western Europe. Famine spread. Some even linked the eruption, which helped fuel famine, to the French Revolution. Painters in the 18th century illustrated fiery sunsets in their works.
The winter of 1784 was also one of the longest and coldest on record in North America. New England reported a record stretch of below-zero temperatures and New Jersey reported record snow accumulation. The Mississippi River also reportedly froze in New Orleans. (news.yahoo)

The last time there was an eruption near the 100-square-mile (160 square-kilometre) Eyjafjallajokull glacier was in 1821, and that was a “lazy” eruption that lasted slowly and continuously for two years.