The rest of the world remains isolated today as the volcanic ash cloud from Iceland’s Eyjafjallajokull eruption continues to ground nearly all flights in or out of UK airports for a third day. People are only just starting to understand the implications of this drastic shut down for the airline industries and for the wider economy, and to think twice about how reliant so many human activities have become on air freight and passenger services.

If you want to get back to the UK today there are only two ways to do it – by taking to the now crowded international (eg Dover – Calais) ferry routes or through the channel tunnel by Eurostar or shuttle.

@HeathrowAirport No flights arriving or departing from Heathrow until 6am tomorrow, at the earliest. Next update due at 8pm this evening #ashtag

The obvious advice during this unprecedented period is not to set off without a booking, and if due to fly next week, keep checking the flight news before leaving for the airport. Nobody knows how long it will take to get everything back to normal, or how long the ash cloud will persist. The volcano is still emitting plumes of ash and the weather conditions remain stable with the dangerous (to jet engines) cloud spreading all over the UK and Europe. 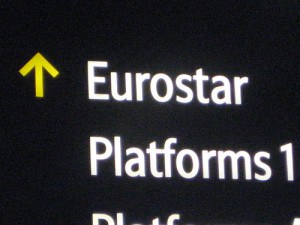 The disruption in travel is costing airliners roughly 148 million euros in lost revenues per day. After Friday, about 16,000 flights were cancelled, making it the largest airspace shutdown since the Second World War.

Some links via Joanne Jacobs

For people who aren’t planning on going anywhere the skies are uniquely empty of aircraft noise and jet trails bringing a surprising tranquility to areas which don’t normally think of themselves as bothered by flight paths, and for photographers the light conditions are perceptively different, with unbroken hazy blue sky scapes.