A new section of the London Overground has opened in a limited way, weeks ahead of schedule says TFLDalston Junction – New Cross and Ne 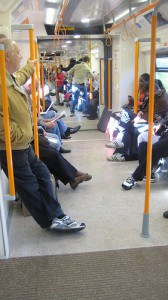 w Cross Gate open 27 April 2010
This section of the line has now opened ahead of schedule with a limited preview service running Monday to Fridays between 07:00 and 20:00 only and will build up towards a full timetable by mid-May.The other southern leg which extends from Dalston Junction to New Cross, Crystal Palace and West Croydon is due to open on 23 May 2010, while the joining section to the rest of the London Overgound outer circle line, from Dalston to Highbury and Islington is due to be completed in 2011.Gospel Oak to Stratford on the other hand, remains closed for engineering works  until 31 May 2010 with signalling and track renewal work, platform lengthening and the refurbishment of some stations. So there’s a  London Overground replacement bus service there presently.The new trains are more like bendy buses on rails though, with limited seating, lots of strap hanging and completely open connections between the carriages. Sitting sideways to the motion of the train is definitely less comfortable than conventional perpendicular seating whether facing forwards or back, but these mass transit systems are all geared towards alleviating congestion at rush hours rather than passenger comfort.Bicycles are permitted on the trains except between 7:00–10:00 and 16:00-19:00 Monday to Friday.