The design for a new bus for London, heavily inspired by the Londoners’ favourite routemaster bus has been unveiled amongst controversy. The cost to Boris Johnson’s mayor office is over £7 million just for the design and first five buses, while design experts have criticised the snazzy curvy appearance of the new bus for ‘trying too hard’. 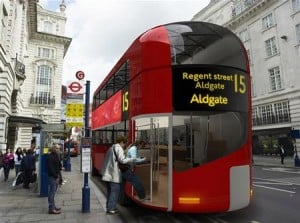 New Routemaster BusThe joint submission by Sir Norman Foster + Partners and Aston Martin won first prize in Transport for London’s competition to design a new bus for the capital. The two teams worked together to challenge preconceptions of bus design with a vehicle that is environmentally sensitive, accessible, convivial and reinvents a much-loved symbol of London for the modern era. Or does it?And what about those curves, do they perhaps break the design law which says that form should follow function and add unneccessary manufacturing costs or is there a green aerodynamic fuel saving advantage perhaps. Now if the curves were at the front perhaps…You can’t help admitting that the design looks smart though, perhaps in a similar way to the reinvented VW beetle car or the new BMW mini. In all cases they are not the same thing as the original design they are inspired by, but are capable of drawing in fans from the newer generations who have got bored with brutal functionalism and appreciate a bit of style over substance. Which brings us back to the bendy bus.