London Cable Car May Go Ahead

London Cable Car May Go Ahead

See also:  London Cable Car
Planning applications for a new London cable car crossing over the Thames linking 2012 Olympic venues in east London have been submitted by Transport for London. TfL has submitted the plans to both Newham and Greenwich borough councils proposing that a London Cable Car station be built a few hundred metres from the O2 arena. The scheme, which it is hoped will be in operation by 2012, is designed to cut journey times between the arena and the ExCel exhibition centre – both of which will be venues for the 2012 London Olympic Games. 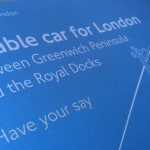 Here’s the impressionistic video to give an idea of what the ride on the London cable car will feel like from Summer 2012. It’s going to be called the Emirates Air Line by the way.