At The Bastille In Paris for Guitar Strings

At The Bastille In Paris for Guitar Strings

Seeing pictures of young Socialist Party supporters celebrating their Presidential Election victory in Paris at the Bastille, reminded me of the few occasions I visited the  Bastille myself.

When I lived in Paris the only time I ever came out of the Metro at Bastille would have been to go to the big music shop, Paul Beuscher. It’s still there today, not covering quite so many shop fronts, and specialising more in pianos than guitars, but still there. The first time I went on the advice of somebody who had told me it was the best place to buy replacement guitar strings, because you could buy singles instead of having to buy a new set every time one broke. Breaking strings was an occupational hazard, we didn’t have portable amplifiers in those days, played purely acoustically, so there was a tendency in noisy corridors or streets to get maximum volume by hitting the strings hard. You know that if you go just a little bit too far a string will break, but every so often you get carried away and it happens. I was asked very recently why I don’t cut off the ends of the strings like most guitar players do when restringing, and it’s for that very reason. If a string breaks near the bridge, which is the most likely place, you can sometimes put the same string back on again, by retrieving the little nipple end that’s fallen inside the hollow guitar body, threading the end of the string through the ring,  tying a knot in it and then tightening the string back up to playing tension again. But you can only do that if there is enough leftover string beyond the machine head to pull back through a couple of inches at least. If it works, then that’s great – you can carry on playing the same pitch without having to go away and find a replacement. Of course you could always carry a set of spares around all the time, but that would have required a certain organised resourceful lifestyle which just wasn’t possible in the 1970s!  I had more than most, though, which meant that other guitarists often asked me if I could lend them a spare D string or more likely a top E in passing. I couldn’t afford to do that very often at all of course, otherwise it would have just been me all the time having to make the trek to  Paul Beuscher’s music shop at Bastille to replenish everybody else’s supplies. 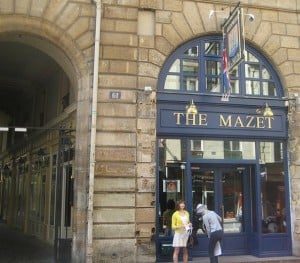 One occasion was a more sever emergency than just a string break. I had a guitar stolen from underneath the pinball machine in the cafe Mazet. Having the means of earning a living suddenly disappear is quite a scary position to be in. As luck would have it, the music shop had a big sale on which included a bin full of broken guitars at next to nothing prices.  After rummaging around I was able to find an Epiphone six string guitar that was only damaged by a large split on the side of the body.  So it was perfectly playable and the sound quality seemed oddly unaffected by the broken wood too. A snip at 150 French francs, equivalent to about £15 then and maybe about £150 in today’s money. Musical instruments and most other thing were generally more expensive in France than in England, particularly so in Paris. Still are. Mid range guitars are probably quite a bit cheaper now than they were then, you could probably buy a playable guitar brand new and undamaged for the same amount, it wouldn’t be as good as my old Japanese built Epiphone though. A few years later Epiphone moved production of their guitars from Japan to Korea and the build quality suffered. Now they make cheap guitars in China, nothing to do with the original Epiphone. I kept and played that old broken Japanese Epiphone for many years afterwards, until the fixed bridge broke and I didn’t get around to having it fixed, what with the broken side as well. Then somebody persuaded me to sell it to them, which I should never have agreed to. Nearly all the guitars I’ve ever sold, I wish I still had. That’s life.