If you drink tea instead of coffee because the day is getting later and you don’t want coffee to keep you awake later when you go to bed, well did you know that a cup of tea contains about a half as much caffeine as a cup of instant coffee anyway? People who enjoy a nice cup of tea tend to carry on drinking several or many cups a day, so the total caffeine intake can become the equivalent to drinking two or three cups of coffee in the afternoon and evening, which is asking for trouble right?

I don’t drink beer and wine very often these days, and I’ve never enjoyed fizzy sugar drinks so I started drinking herbal teas decades ago of various sorts, and some are really good but only in small doses. Then I discovered the Rooibos or Redbush tea, branded as “11 O’Clock” or “Tick Tock” which is a caffeine free herb tea that actually tastes more like black tea than the green herb and fruit concoctions, and quite soon becomes an acquired taste that is actually more satisfying and thirst quenching than black tea, breakfast tea, indian tea, tea tea etc. So it’s good news that Rooibos is actually good for you with lots of antioxidants, and not in any way bad for the health.

Now rewind a decade or two and somewhere in East London I discovered Palanquin Spiced Tea. If you’ve ever ordered masala tea in an Indian restaurant you may be familiar with the idea of pungent spices boiled with tea, usually boiled with the milk and sugar too.  Palanquin were the first to make it work as a tea bag, and not by any means as a pale imitation of the real thing.  You can get other spicy teas, such as Celestial Seasons Bengal Spiced, and the range of Yogi teas but the balance is all lop sided to my taste, whereas Palanquin gets it right. The only problem was, well two problems – availability was patchy. You could find Palanquin spicy teas in East London supermarkets for a while, but you know how fickle they can be with local products (Palanquin is now made in Essex) and being based on a black tea, you can only drink so many cups a day without getting overcome with tannins and caffeine, especially of you let it brew for a bit too long, in which case it just gets stronger and stronger. But now Palanquin have started blending Rooibos or Red Bush tea as well as the standard black tea, and red bush doesn’t do that. You can leave the teabag in the cup for half an hour if you like and it doesn’t get that stewed taste at all, it just goes cold. And when you’ve drunk the tea you can pour more boiling water over it and it makes a perfectly acceptable second cuppa. Roibos is everywhere now and there’s really little or no reason to drink black tea anymore, well maybe after a Turkish meal or something in a little glass.

But now for everyday tea drinking you can get red bush spiced tea from Palanquin and that’s just about the ultimate perfection as far as I can taste, if you can find it. Or order online one day when the website ordering system is up and running properly.

Palanquin Red Bush Tea, with its many positive health benefits is a great choice for health conscious people. 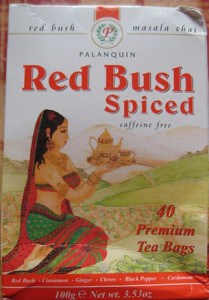