There’s a Jade Horse figure at the British Museum, somewhere..

I went to The British Museum on Monday, which happened to be the first working day of the London 2012 Olympics, having first checked their website at http://www.britishmuseum.org/ , to make sure the North American Landscape Garden was still there. It was.

We saw it. I have to say we weren’t so impressed by the layout or contents of the installation by Kew Gardens, compared to previous years’ Australian and South African Landscape  and other representations. But never mind, it was a nice day and pleasant enough to walk around. There was no problem going inside the free areas of the British Museum either, and right in the middle of the grand courtyard is the gentle spiral stone staircase leading to gallery where we saw the Grayson Perry exhibition last winter. The current exhibition is called The Horse: from Arabia to Royal Ascot which didn’t sound too promising to Linda, but I encouraged her with the suggestion we might see the figure of a horse in jade.  This was only half a thought, really, left over from having viewed the British Museum website the night before, and understandably linking the image of the jade horse with the horse exhibition.

The history of the horse in art provided some special examples to look at and I particularly liked a couple of pre-hittite clay horses that were described as having some religious purpose but looked more playful or practical than that to me. The film of rock painting was really good too. No sign of the jade horse though, so we went round again in case we’d missed it. No. Never mind, I may have been mistaken.

Back on the ground floor, there’s a large circular information desk, in fact two of them I think, and a couple of staff with only one busy with a visitor so I strolled up and wondered if they could help me. “Could you tell me where the Jade Horse is please? I was on your website last night and noticed a jade horse, and I’d like to see it if at all possible.”

“It’ll be in the Horse exhibition”

“We’ve just come from there, and didn’t see it.”

“Let me look it up for you”

“Where is it please”

“Unfortunately I can’t get the actually location within the museum for the objects, only the descriptions and details. If it’s not in the Horse Exhibition, as it’s on loan, I suppose it should be in the temporary exhibits space, near the entrance, over there, then turn left.”

So we went and had a look around the temporary exhibits space, which is worth a visit for the prehistoric bone carvings and lots of other stuff but doesn’t have a jade horse. By this time, finding the jade horse has turned into some kind of quest. I wasn’t really that bothered about it before, but the challenge beckoned. Heading back out to the courtyard I saw that the information stand person was still underoccupied and caught his eye.

“No we still haven’t found it”

“In that case, if it isn’t in the Horse exhibition and it isn’t in the temporary exhibits space then the only other place I can think of to look would be the China and Southeast Asia Gallery”

“Straight out the back there, straight on through the doors then turn left”

We headed in that direction, found Gallery 33 and looked at the Thai and Indian exhibits there. The China gallery seemed to be the one opposite, which would have been found by turning right through the doors.

We spent some time looking carefully through the ancient artefacts in the China gallery, but began to despair as we neared the end and still found no jade and no horses. I spotted a British Museum gallery assistant or security bod sitting on a chair with headphones on and woke her up by asking

“I don’t suppose you know if there’s a Jade Horse here somewhere?”

“Wuh… ah Jade! Yes, the Jade exibition is straight on down there, around the corner on the right.”

And there it was, a little corridor with a small sign that said something like “7,000 years of Jade Art in China” with some exquisite pieces on display and about half way along, two jade horses including the one from the website allelulia! We had in fact found the exit to the Jade exhibition and after taking it all in, we exited through the entrance which nobody would ever find by themslves not even if they had EIGHT thousand years to wander around in the British Museum.

That was the long story. I could have instead told the short story, which goes like this: The information desk in the British Museum cannot confidently direct people to the physical location of an unknown object within the museum because their database doesn’t contain this essential information.

It’s not the fault of the workers on the information desk. They did the best they could with the knowledge they have and the tools provided. The people who publish the website messed up, by promoting an object with a beautiful image but not bothering to mention the temporary exhibition with which the object is associated. It’s also possible that the database of objects has been designed without the fields for inputting a gallery number or other location data. 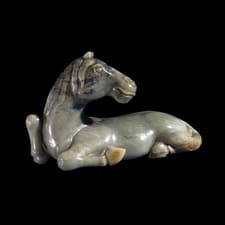 This impressive horse belongs to a small group of carved jade animals, mainly horses and buffaloes, carved on a much larger scale than usual, and all in the same range of green opaque stones. There is no direct evidence to help us define precisely when and for what purpose these large creatures were carved.

The slender and elegantly smooth carving shows the horse lying down, its hind legs tucked under its body. The mane and tail are carefully worked to represent the hair, with the other features – eyes, jaw, limbs, muscles and sinews – shown in fine grooves.