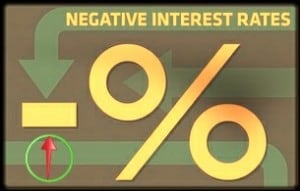 The following news snippet about negative interest rates made me sit up and think:

A curious auction of German bonds this morning saw investors agree to negative interest rates, but more than half the debt was left unsold.

The Bundesbank sold €1.17bn of 12-month bonds at a yield of -0.0184% (which means buyers will receive slightly less than they paid when the debt matures in September 2013).

A total of €3bn of bills were on sale, but despite receiving €6bn of bids it held back €1.83bn which it now plans to sell in the secondary market.

What does it mean to have negative interest rates? It means that the lenders (institutions) are actually willing to invest their money into these bonds, knowing that the risk of losing a tiny fraction of their money is 100%

They are in practice paying a small fee to the German government to keep their money safe for them.  All investments carry a small risk of losing money, share prices can go down as well as up, and banks, financial institutions and governments can go insolvent and renege on their debts. The people who bought these bonds perhaps considered all other possible investments as riskier than the German bonds, but they have to put their money somewhere, so were willing to pay the price.  Either that or they have some kind of portfolio management policy which requires a particular spread of investments and risks, and this was the only way they could make it balance on that day.

The precarious state of the world’s economies is such that despite governments printing money, energy prices rising and other inflationary pressures, the debt crisis and austerity policies being implemented may result in real monetary deflation, where wages and consequently prices fall in real terms and it may be worth trading  €1  One Euro for the promise of  €0.9998  ninety nine point nine eight cents in a year’s time. Where else can you keep your money safe?

The psychological effect of this on financial confidence and market stability should not be underestimated.

Are there any other examples of negative interest rates out there?