Last Saturday we went wandering around London’s West End theatre districts photographing a number of the theatres dressed up for their current shows. We were armed with the theatreland map, in case of memory lapses, but we didn’t plan a meticulous route to take in as many as possible. We arrived by bus from Liverpool Street and got off at the top of High Holborn, near to the Shaftesbury theatre where Rock of Ages is still going strong. 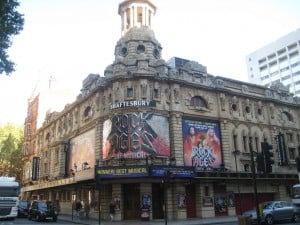 Rock of Ages at the Shaftesbury

The Shaftesbury Theatre is a large fronted  building and you need to cross to other side of the road to even attempt to fit it all into one photograph.

From there we went down into Covent Garden, diverted around to see the Theatre Royal Drury Lane, and a few restaurants in the area. The Fortune Theatre, where Woman in Black is just to one side also, but we somehow missed the New London Theatre on the way out, but managed to catch Warhorse on the way home as it happens.

Down on Aldwych and the Strand, there’s a nice cluster of theatres including the Novello, The Duchess, Lyceum, Savoy, Vaudeville, Adelphi, the Aldwych theatre itself but the Strand Theatre must be dark? After that lot we needed more coffee and after rejecting a few suggestions ended up at the Cafe Rouge in Villiers Street.

Refreshed we headed back up to weave our way around Trafalgar Square past the Duke of Yorks, Garrick and Noel Coward theatres and around the side of Wyndhams, currently dark, through into Leicester Square and Piccadilly circus. At this point I had a sudden memory lapse disorientation and lost the Haymarket, chasing off in the wrong direction. We’d already found the Harold Pinter theatre though. Time for lunch in Chinatown, and a bit of food shopping for later. Where else can you but two salmon tails for a couple of quid?

fish for lunch is not such a great idea on a working day though, and after a few more theatres visited and photographed the feet and legs started to feel heavier. One thing you can always do in central London though, as an Oystercard holder, is to jump on a bus. Any old bus, as long as its headed in the right direction. No actually, we made sure it was going to Victoria, a long enough rest and a remote cluster of West End Theatres, well two. The Apollo Victoria for Wicked  and The Victoria Palace Theatre where Billy Elliot has been on for years as well.

Nearing the end of our sensibilities, we walked down Vauxhall Bridge road for some reason, then hopped on another bus heading back to Aldwych just in time to catch the coach breaks parties parking up outside Shrek, and mopped up War Horse at the New London Theatre.  That was a pretty comprehensive round trip of the theatre districts in Central London but which theatres did we miss that we need to plan a route more carefully to take in another time?  Well there is the London Palladium, out on its own up there by Oxford Circus, the two theatre in the Haymarket: Her Majesty’s and the Theatre Royal Haymarket, the Piccadilly Theatre we did cover, because that’s where Viva Forever posters are up already, also the Criterion for The 39 Steps and The Prince of Wales for Let It Be were on part of our route, but we never went down to the the river so that leaves the Playhouse Theatre (what’s on since Dreamboats?)  and anything on the South Bank such as the Old Vic.  We also managed to avoid Tottenham Court Road this particular time, leaving out the Domion for We Will Rock You, The Phoenix where Blood Brothers is ending a long run, and the big umbrellas outside The Palace Theatre, Singin In The Rain.

Also saved for the next time out were The Arts Theatre, St Martins Theatre and the  Trafalgar Studios.