This is a healthy variation on the normal meat and seven vegetable stew recipe for couscous. Red wine is the usual agent which is used to deglaze the pot after having browned the meat, and the purpose is this is twofold. Firstly it helps to lift any particles of browned meat or caramalised onions and garlic which are starting to stick to the pan and puts them into solution with the beginnings of a stock or gravy. Secondly, the wine provides a certain amount of acidity which helps to bring out the flavours in the cooking. The alcohol from the wine evaporates, so those who don’t drink have nothing to worry about. 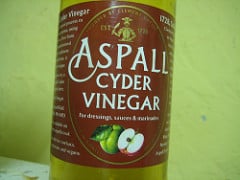 So one possibility is to replace the red wine for these purposes with a smaller quantity of apple cider vinegar. Apple cider vinegar does the job of the wine perfectly well in both respects, and has the bonus of providing a naturally restorative effect on the blood, with proven benefits for the prevention of ageing and arthritis in the joints. You use less apple cider vinegar than you would red wine, because the acidity is more concentrated and the flavour stronger so the total liquid may need to be increased with some more water or tomatoes. And if you do drink, then there’s a whole bottle of red wine to have with the meal instead of the dinner having greedily swallowed two or three glasses all by itself!

Couscous originates from middle eastern and African countries of the Maghreb which are Muslim by faith and therefore don’t eat any products from the pig. But with the growing popularity of couscous recipes in the northern continents there are new possibilities for creating recipes with pork. Belly pork or pieces of leg with the fat included are best, but you could also roast a loin then carve it and serve with the traditional vegetable stew, chick peas, and couscous. The use of apple cider vinegar with pork couscous recipes is particularly recommended, to borrow from the revered old English tradition of eating roast pork with apple sauce. Don’t forget the harrissa though.