OK, I woke up on Wednesday morning with an idea in my head that just seemed to be a natural way forward for the music side of things. A podcast.

It’s not a big stretch really, but for some reason hadn’t occurred to me before. I’ve been doing a weekly live music broadcast on Ustream.tv since July 2009, nearly a year ago, and sometimes a few people login and say hello, others just lurk, and it’s very much a live, ephemeral event. Some of the songs I perform I also record using the ustream system, and they can end up on youTube, and some of them I don’t. It depends how I feel at the time. By keeping the time and day of week the same – always on a Tuesday at 7.00pm UK time – I thought it might encourage a small group of regulars to build up, and there are indeed some people who do drop in on a semi regular kind of basis. But if I don’t bother to send out a tweet and a facebook status update, or set up an event, then it can seem kind of like pushing a boulder up the side of the mountain. It can fall back again so there’s nobody there except myself and Linda and a couple of anonymous attenders who may or may not be paying attention. But then again, people have also mentioned to me face to face that they were there listening on an occasion, but not logged on, so it’s not really anonymous, that’s just how it can seem subjectively, which is not really something to be at all worried about. And That’s all OK as far as it goes, because the Tuesday night shows allow me to rehearse a few songs that I might end up performing in front of a live audience at the Havering Folk Club the next day, and help to build up the collection of videos to the Andy Roberts Music youTube account, which can get thousands of views sometimes. 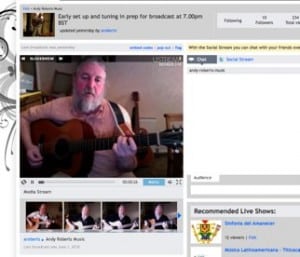 But it seems I may have been missing a trick. It struck me that for all sorts of reasons there can be a few people who might have wanted to turn up on any particular Tuesday evening but can’t make it that week, or forget, or go out, fall asleep, desperately need to watch the stupid box or cook dinner etc. I toyed with the idea of moving to a different time of day. Maybe a Sunday afternoon or something like that. But Tuesday evenings are convenient for me as it happens. So maybe a couple more people could tune in if they could do so at their own convenience, asynchronously, using the simple podcast technology that’s been around on the internet for several years now. There could be a choice between downloading audio only, as in conventional iPod mp3 player, or a video podcast. I’ll learn to pipe more than just live webcam video into that at some point.

So nothing much is going to change with the Tuesday evening live broadcast music shows, except for this: Instead of setting Ustream to record individual songs as and when, every week the whole show will be recorded, 20 minutes half an hour or whatever, and made available as a podcast which can be subscribed to in iTunes, downloaded, accessed from this blog or via RSS etc. The thing that podcasts do best. So you can listen or watch when you like.

So I’ve decided to start off with a plan, and this is the plan: The new Andy Roberts Podcast will go live in July 2010, with a prototype starting next Tuesday and ongoing during June, so I can learn what needs to be done and how it all works out. The best way to find out how to subscribe for now,  is going to be to subscribe to the RSS for this blog. There’ll be another post just before July telling you how to subscribe in iTunes or get the podcast automatically delivered to the podcast player of your choice.  Once we’re underway in July, the whole podcast idea in the context of the Andy Roberts music project will then be subject to some good old plan /do / review reflective practice with no doubt, a series of iterative cycles which really start with the prototyping in June.